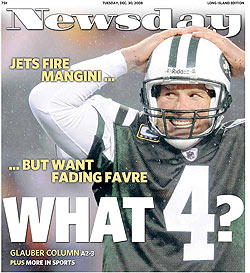 If Johnson and GM Mike Tannenbaum are really serious about staying with Favre and a right arm that needed an MRI yesterday, a scattershot right arm that will be 40 years old in October, then they aren't moving forward. They are being held hostage to a pipe dream that our favorite Hall of Fame icon can go Pack to the future and remain forever young, and they are holding their next head coach hostage to that pipe dream as well while Favre holds them all hostage with his Shakespearian lament, To Play Or Not to Play?

Some players agree: Kerry Rhodes said, "If he's dedicated and he wants to come back and do this and do it the right way and come here and be here when we're here in training camp and the minicamps and working out with us and doing all those things, then I'm fine with it. But don't come back if it's going to be halfhearted or he doesn't want to put the time in with us."

The Daily News' Rick Cimini suggests that Mangini's fall began as soon as Favre was traded to the Jets ("Although he publicly supported the acquisition of the future Hall of Fame quarterback, Mangini wasn't the driving force behind the acquisition, according to two people familiar with the team's thinking"). However, other factors doomed the former Mangenius: His apparent lack of emotion, he was too hands-on, not enough adjustments from week to week.

Right now, Newsday's Bob Glauber, who also wants Favre to decide on his future ASAP, forecasts chances for potential Jets coach picks. Glauber gives the Bill Cowher 3-1 odds, but adds that the Steelers' former coach "might not want the pressure of coaching in New York."