From Law & Order to Gunning For The White House 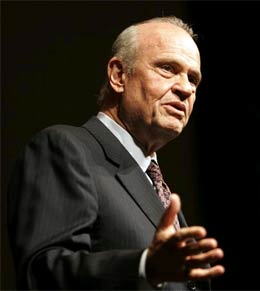 This week's big election news will likely center around former Senator and former Law & Order actor Fred Thompson, who will finally announce his presidential campaign this week. Newsday reports that earlier this summer, Rudy Giuliani's fund-raisers were "pleasantly surprised" that Thompson hadn't announced his candidacy, with one source saying, "They though they were getting a break that he didn't get in."

The NY Post's DC bureau chief Charles Hurt says that once Thompson makes things official on Thursday, he "ill become, in an instant, the greatest threat" to Giuliani. A Giuliani adviser in South Carolina, Barry Wynn, acknowledged to Newsday, "[Thompson is] certainly weaker today in terms of the level of enthusiasm of his supporters than he was a month ago ... but I certainly see him as serious competition."

Thompson's campaign team hasn't raised as much money as they had hoped, coming in $1.5 million short of a $5 million goal for its first month, and will have to play catch up to Giuliani and Mitt Romney. However, a Bush official tells the Daily News that Thompson is "the best bet for us. He's ideologically and culturally suited to our base, and he's been away from Washington long enough that he's not perceived as part of the mess." In other words, as another former White House aide said, "The best thing going for him is he's not McCain, Romney or Giuliani."

There is speculation from the National Review that Thompson may have waited so long to announce his presidency because he'll announce his running mate at the same time. At any rate, he's on the cover of Newsweek, with the headline, "Lazy Like a Fox." And we leave you with a bit from Conan O'Brien's monologue: "Earlier today, Senator Fred Thompson, who, of course, was a former star of “Law & Order,” confirmed with his supporters that he is running for president. Then, afterward, Thompson promised to solve the Iraq crisis by the end of the episode."