From Bartha to Bauhaus 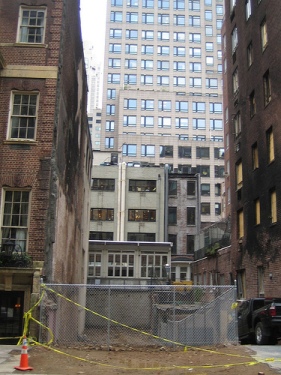 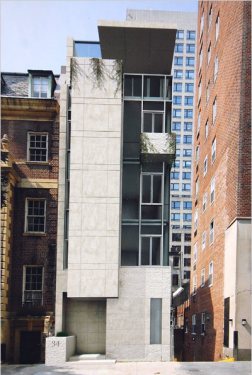 The Landmarks Preservation Commission approved a modern design for a townhouse to be built at 34 East 62nd Street. The lot, just east of Madison Avenue, has been empty ever since Dr. Nicholas Bartha blew up his home, which seemed like an effort to keep his ex-wife from taking the home as part of their acrimonious divorce settlement.

The new design (rendering on right), by Preston T. Phillips, is a departure from the original townhouse, which was more traditional and was declared a landmark in 1981. CityRoom reports that the LPC approved the design 8 votes to 2, with LPC chairman Robert Tierney declaring, "The new building relates well to the streetscape and district through its proposed materials, scale, hierarchy and organization of facade elements." However, One of the opposing members said, “It’s a missed opportunity for good, modern design that isn’t hostile." Ouch.

The new design, which still has room for a driveway on the right, includes four bedrooms, conservatory, spa, waterfall, indoor pool, wine cave and geothermal heating system (at least as of an August plan). And the property is owned by Janna Bullock, who paid $8.3 million for the lot and told the NY Times she would resell it for $30-40 million.