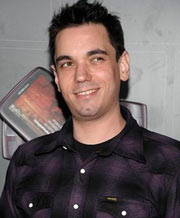 The NYC Medical Examiner's Office has completed an autopsy of celebrity DJ Adam Goldstein, known as DJ AM, whose body was found in his Soho apartment yesterday afternoon. According to TMZ, "There has been no determination as to the cause of death -- more tests are needed, including toxicology. That could take several weeks to complete." It's suspected that he may have died of a drug overdose, as a crack pipe and numerous prescription drugs were reportedly found near his body. Friends had become concerned when he didn't go to Las Vegas for a gig and called the authorities to Goldstein's $2 million apartment at 210 Lafayette Street (One Kenmare Square).

Goldstein, who previously battled drug addiction, had survived a private plane crash in South Carolina last year; four other people died and Goldstein and Blink-182's Travis Barker were the only survivors, suffering second- and third-degree burns. A friend, DJ Scott Schroer, told the Daily News, "Prescription drugs? If you had been in a plane crash a year ago, I'm sure you'd have prescription drugs, too... After the accident, he changed. He was more humble. He cared more about people and life." Another friend told the Post, "He was taking painkillers, and he slowly grew addicted," while a third told Fox News, "The need for drugs grew, and now here we are. It's terrible that no one was able to stop him soon enough, but it just happened so fast."

Besides DJing—he was "resident DJ" at the Palms Casino in Las Vegas and just played in Atlantic City last Saturday, telling the crowd, "Are you guys f**ked up tonight? I'm not."— and working on the video game DJ Hero, Goldstein was also working with MTV on a show about drug addiction and intervention called, Gone Too Far. He told Extra, "It's life or death, some of these people have come so close to dying, just as I did ... People were there for me when I asked for help, and I had no idea how to stop, so I'm there for them." Reportedly eight episodes of the show were completed.