One Brooklyn resident has been missing since Saturday, and friends are rallying a desperate search attempt in hopes of bringing him home. 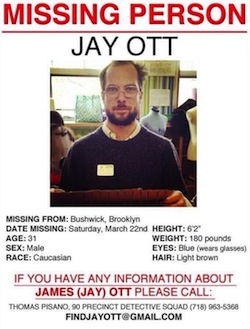 Jay Ott, a 31-year-old fashion designer who lives in the McKibbin Lofts, was last seen on video surveillance footage entering his apartment at around 10 p.m. on Saturday night. His friends say they've had no contact with him since then, and have reported him missing; they have launched extensive search efforts, and are asking anyone with information to contact them or the 90th Precinct.

Friends in Brooklyn and Manhattan have plastered "Missing" posters in subway stations all over the city; Kim says they've been calling hospitals, police precincts and central booking in an attempt to track him down. His credit cards and phone have not been used since Saturday night.

Ott, who is originally from Pittsburgh, is described as 6'2", 175 pounds with blue eyes and brown hair. According to the NYPD, he was last seen wearing a black sweatshirt, gray pants, yellow scarf, a navy blue knit cap, white sneakers and gold-rimmed glasses; his friends say they cannot confirm this is what he was wearing. Anyone with information is urged to call Detective Thomas Pisano at the 90 Precinct Detective Squad, (718) 963-5368, or email findjayott@gmail.com.