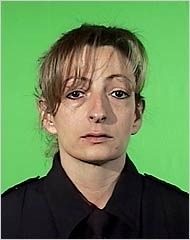 A ballistics report confirmed that Annemarie Marchiondo, the 17-year veteran police officer who was shot during a confrontation at the 176th Street 4 platform last Friday, was injured partly by friendly fire.

Marchiondo and two other plainclothes cops had stopped three men who were walking between subway cars and asked them disembark the train. One of the men, Juan Calves (also referred to as Juan Calbett), grabbed Marchiondo into a headlock and pulled out a gun. Marchiondo broke free and Calves and the other officers ultimately fired at least 18 times. Marchiondo was hit three times, and one of the bullets was from her fellow officer.

The Sun reports that that the officer who shot Marchiondo "will not face disciplinary action because the gunfight broke out in close quarters where everyone involved was separated by a matter of feet." Calves, an convicted felon who served time in prison for armed robbery and killed a man during his sentence, died during the shootout; two of bullets found in Calves' body came from the third police officer.

#crime
#fire
#gun
#police
#robbery
#subway
#the sun
#train
Do you know the scoop? Comment below or Send us a Tip
A new Gothamist is coming! We’ve moved comments over to our beta site. Click here to join the conversation and get a preview of our new website.