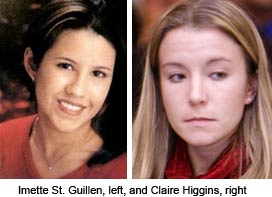 Around 11 p.m. on the night of February 24, 2006, Higgins and St. Guillen headed from Higgins's Morningside Heights apartment to the Pioneer Bar. In the middle of their time there, Higgins recalled that St. Guillen had about four or five rum and Cokes: "We were all drinking the same amount of drinks, but Imette seemed more drunk." By 3:00 a.m., Higgins wanted to leave, but St. Guillen wanted to stay. The pair argued in the bar but eventually St. Guillen agreed to leave. From the Post:

When the pair hailed a cab, St. Guillen told Higgins, "You get this one, and I'll be right behind you."

"I said, 'No, I'm not leaving you.' We stood there arguing about leaving," Higgins recalled.

"Then Imette started walking down Bowery toward Kenmare [Street], and she was very drunk," Higgins told cops. "After more arguing about leaving her by herself, she kept saying that she wanted to stay out."

The two women made such a spectacle that a stranger pulled up in a car and asked if the squabbling friends were all right.

They waved the woman off and kept arguing about St. Guillen wanting to stay out alone.

"Finally, I couldn't keep arguing with her, so I got in a cab and went to my apartment," Higgins said.

The next day, when St. Guillen's family filed a missing person's report, Higgins said she walked around Soho, asking bars if they had seen her friend, including The Falls, whose bouncer Darryl Littlejohn was eventually charged with St. Guillen's murder. While there, she received a call from St. Guillen's sister, saying her body had been found. From the Post:

Higgins recalled that the bar's manager, Danny Dorrian, emerged from the back office as she took the call, tears streaming down her cheeks.

She said she turned to the pub scion and said, "My friend was missing, but they found her body."

Unmoved, Dorrian folded his arms and said, "New York can be a tough town," according to Higgins. Little did she know that Dorrian was one of the last people to see St. Guillen alive when he ordered his bouncer Littlejohn to throw her out of the bar at closing time, 40 minutes after Higgins had left her, according to press reports.

Dorrian stalled the police investigation and only admitted that St. Guillen had been a customer days after the investigation started. People were upset about Dorrian's actions (Littlejohn, a career criminal, should not have been hired, per State Liquor Authority rules) and rejoiced when The Falls closed months later.

Littlejohn has been awaiting trial for the past two years. Tomorrow, he will be tried for a different abduction of a woman in Queens. The trial for St. Guillen's murder is expected to take place next month in Brooklyn.

#Claire Higgins
#danny dorrian
#darryl littlejohn
#imette st guillen
#murder
#The Falls
Do you know the scoop? Comment below or Send us a Tip