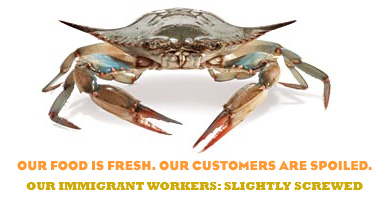 Approximately 85 undocumented workers are being fired from the high-end grocery delivery company Fresh Direct on the on the eve of the holiday season because their status as U.S. residents is disputed. Dozens of workers filed out of the company's Queens warehouse. Fresh Direct blamed a federal probe for the axing of almost a hundred workers.

According to the Daily News, "management insisted it carried out the purge under pressure from federal authorities to crack down on illegal immigrants" and the company said it was "cooperating with the United States Citizenship and Immigration Services in its review of employment documentation."

Paradoxically, the local union is fighting for undocumented laborers' rights to work at the Fresh Direct warehouse.

of the International Brotherhood of Teamsters, which over the summer began an effort to organize a union among the 900 workers at the FreshDirect’s warehouse in Long Island City, Queens, asserts that the suspensions are an effort to foil a unionization election scheduled for Dec. 22 and 23.

We find it fascinating that organized labor, which has been fighting outsourcing to foreign countries with more relaxed labor laws, is now battling to allow undocumented immigrants in the U.S. to unionize in America. We suppose that makes sense, but the two trends seem at odds.

Local 805 President Sandy Pope discussed efforts to unionize workers on the Brian Lehrer Show in October, and the union's website puts its feeling about Fresh Direct out in the open.