Free Food? Thanks, But Fire Isiah! 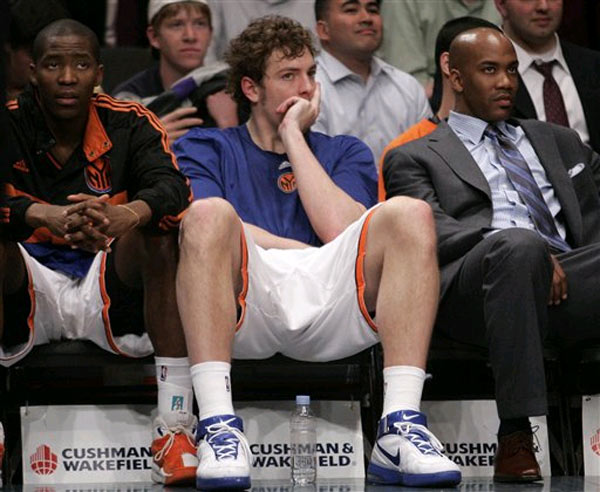 Photograph of Jamal Crawford, David Lee, and Stephon Marbury watch the 4th quarter of the Knicks-Celtics game by Ed Betz/AP

Of all the local fan bases, the Knicks' -- and not the pessimistic Mets' -- supporters have earned a reward. They got just that with free concessions during Monday's loss to Boston (what else is new?) on fan appreciation appreciation night in the season's final home game. Knicks marketing SVP Howie Jacobs explained, "We think it’s appropriate to thank our fans for a lot of loyalty they’ve shown us this year.”

Amazingly, the Knicks, who used to sell out every game, allegedly filled the Garden for 21 of its 41 home dates. That has to be the best sellout-to-win ratio in basketball (21:23)! Among those in attendance: Trevor Immelman, winner of the 2008 Masters, who can say he was there to watch the Celtics.

Fans can only hope that Isiah Thomas has coached his last Knicks game in Madison Square Garden -- firing him would be a true show of appreciation for the fans' support. New team president Donnie Walsh will ultimately decide if Thomas gets to stay as coach. Thomas hasn't done anything to merit keeping his job, but the two did work together in Indiana, so don't count out something strange.

The Knicks will try to avoid tying a club record for losses when they visit Indiana on Wednesday.