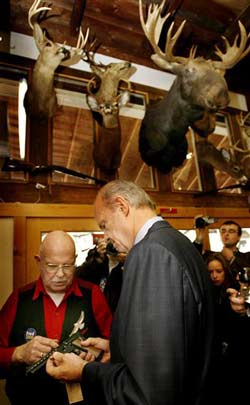 Who knew thousands, if not millions, of New Yorkers would agree with presidential hopeful Fred Thompson on something? In this case, the former Senator and former Law & Order District Attorney was talking about Rudy Giuliani's reliance on touting his New York City credentials during a campaign stop in New Hampshire today.

During his terms as mayor, Giuliani supported gun control laws - which many big city mayors do. He was even the only Republican to sue the gun industry, but more recently, Giuliani has eased his position to say he supports an individual's right to bear arms. So Thompson took the opportunity to note his rival's record, "(Giuliani) simply supported just about every gun control legislation that came down the pipe. I just disagree with him on that. I saw he was at bill signing ceremonies with (New York Sen.) Chuck Schumer and President Clinton and others for gun control legislation over the years. Of course, he's not as outspoken about it any more." Then Thompson bragged about having his own skeet shoot.

It's unclear how the NRA feels about Giuliani, after he took that phone call from his wife during an important speech.

Photograph of Thompson at Skip's Gun Shop in Bristol, NH, by Jim Cole/AP