A Sweet 16 celebration was marred by tragedy when one of the attendees died in a freak accident aboard a double-decker party bus. Authorities say that Daniel Fernandez, 16, stuck his head out of the roof hatch, and his head slammed into the underside of an overpass on I-95 near the George Washington Bridge. He was pronounced dead at the hospital. 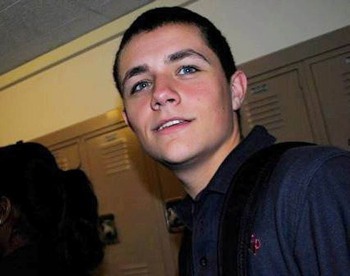 Many of the teens on the bus were students at St. Francis Prep in Queens. They had been headed to a birthday celebration at the Venetian catering hall in Garfield, according to the Bergen Record. NBC New York reports, "They boarded the bus in Queens, and crossed over the George Washington Bridge to New Jersey shortly after 6:30 p.m." It appears that shortly after, the hatch was opened and Daniel stuck his head out.

A security guard on the bus, Alex Franco, told the Daily News, "I told them not to open the hatch, like three or four times, but kids, they don't understand." Franco says that after telling them not to open the hatch, "he headed downstairs to tell the driver that it was getting too hot in the bus." Franco said, "It was very hot. Everybody was dancing. Two, five minutes I was downstairs. Then I heard two guys screaming, ‘Oh my God, oh my God,’" and once upstairs, "I saw him on the floor. His face was like, no teeth. I said, ‘Who is this guy?’" The hatch is used for emergency situations (like if the bus overturned, passengers on the upper level could be removed via the hatch).

The bus was operated by Designer Limousines, which describes its double-decker party bus as being "fully loaded": "This party bus is unique for many reasons, including accommodations for up to 70 passengers, a downstairs and upstairs bar, 2 hostess stations and a first level dance floor, with in-style night club lighting. Guests can dance to over 100,000 songs from our juke box or enjoy entertainment on one of the 15 flat screen satellite TV's. There is even a VIP room to accommodate special guests."

The Record says that teens who were on the lower level of the bus were allowed to leave while those on the upper level were questioned for hours. Also: "A Queens man said his daughter had been on the bus and was 'traumatized.'"

#daniel fernandez
#freak accident
#nj
#party bus
#st francis prep
#Sweet 16
Do you know the scoop? Comment below or Send us a Tip
A new Gothamist is coming! We’ve moved comments over to our beta site. Click here to join the conversation and get a preview of our new website.