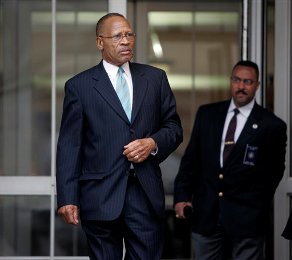 Sharpe James, five-time former mayor of Newark, NJ, was convicted by federal jury this morning on charges he conspired to, per the Star-Ledger, "rig the sale of nine city lots to his mistress, who quickly resold them for hundreds of thousands of dollars in profit."

The jury, which had deliberated for five days before returning a verdict today, found James guilty of 13 counts of corruption. James' ex-girlfriend, Tamika Riley, who bought South Ward properties between 2001 and 2005 for a total of $46,000 and then flipped them for $665,000, was also found guilty of the same charges.

Riley, who runs a PR firm, had no prior development experience before buying the properties. She was also convicted of tax fraud related to her business and the sale of the South Ward properties. From the Times, "The lawyers for Ms. Riley contended that she was not aware that she had to file income tax returns for her public relations firm, and that she received bad legal advice about satisfying requirements for buying the property from the city."

The pair face between four and eight years in prison; they remain free on bail until their sentencing this summer. James' lawyers, who unsuccessfully tried to prove the powerful former mayor and State Senator didn't manipulate the sales (the Municipal Council had final approval), said their client would appeal.

Here's full coverage of the trial from the Star-Ledger.

#conviction
#fraud
#newark
#nj
#Sharpe james
#u.s. attorney
Do you know the scoop? Comment below or Send us a Tip