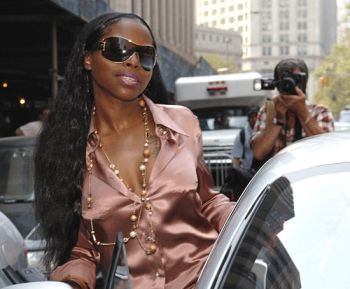 After doing time for violating probation and assaulting a manicurist, Rapper Foxy Brown found herself in court again yesterday. This time it was for attacking a neighbor with her Blackberry phone, causing the victim a bruised eye and chipped tooth.

Brown, who in the past has pleaded guilty and then tried to take it back, pleaded guilty. By doing so, she avoids trial and thus a maximum sentence of seven years behind bars. Instead, a Brooklyn judge sentenced her to time already served, on top of an order of protection.

Foxy also had to apologize in writing, in which she reportedly wrote: "I apologize for the incident that occurred on 31 July 2007, in that I attempted to scare Arlene Raymond and place her in harm's way." Brown's lawyer had this to say about Foxy avoiding jail this time around: "We consider it a victorious day today, and we're moving forward so she can focus on her career, family and fans. She feels great. She's really happy and excited to move forward. We're very pleased with this outcome."

This is all great fodder, of course, for the reality television show she began filming after ending her 8-month sentence last month.

#assault
#attack
#blackberry
#brooklyn
#court
#foxy brown
#guilty
#jail
#reality show
Do you know the scoop? Comment below or Send us a Tip