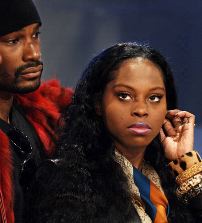 Foxy Brown, who last year found herself a resident of Rikers, is attempting to get released early. Not surprising considering she (falsely) declared pregnancy prior to sentencing. Her latest attempt for a "get out of jail free card" is based around her hearing problems.

Now she's asking to serve rest of her sentence at home so she can receive "adequate treatment" for her ear and "have her cochlear implant reprogrammed and repaired or else face imminent harm to her hearing." Brown received a cochlear implant in 2006, when she suddenly lost her hearing. Other celebrities with cochlear implants: Rush Limbaugh, former Miss America Heather Whitestone McCallum.

Apparently Brown's current implant was damaged during an "altercation with a fellow inmate," which has caused non-stop bleeding in her ear (guess she's out of solitary). Her request will be heard by the judge who sentenced her, at an undetermined date...so it can't be that urgent.

Pictured: Foxy Brown at a 2005 press conference discussing her hearing loss. From the AP.

#america
#foxy brown
#get out
#Miss America
#prison
#rush
#rush limbaugh
Do you know the scoop? Comment below or Send us a Tip