Foxy Brown Sentenced to a Year in Jail 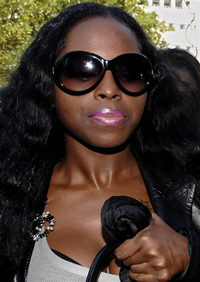 A judge sentenced Foxy Brown to a year in jail yesterday for violating the terms of her three-year probation. Officials asked that her probation be revoked following an incident in August when Brown (neé Inga Marchand) allegedly assaulted a neighbor with her BlackBerry wireless device. Brown was contrite and promised to adhere to whatever probation conditions the judge would set forth, but apparently the BlackBerry incident was the last of a long string of probation violations that proved too much for Criminal Court Judge Melissa Jackson. Probation officials said that Brown's violations included moving out of NY State without telling them, allegedly assaulting a beauty shop employee in a dispute over payment while in Florida (without asking permission to leave NY state), failing to report an arrest in NJ, not attending court-mandated anger mandated sessions, and not reporting to her probation officer. Brown was on probation for three years after pleading guilty to an assault on two manicure shop employees in NYC in 2004.

The New York Times account of Brown's day in court includes details from the arresting officer in Mahwah, NJ who pulled her over for talking on a cellphone while driving her Range Rover. Officer Russell Read said that Brown tried to evade him by making a U-turn, was driving with a suspended license and registration and attempted to avoid identification by misspelling her name and fudging her date of birth. Read testified that during the encounter, Brown said that her father was the head of an all-black law enforcement agency, she was related to Russell Simmons, she threatened Read's job, and that he was arresting her for D.W.B., or "driving while black."

According to the Daily News, Brown's sentence means that she could be released in eight months with time off for good behavior and time served. This means that Brown will give birth to her baby while incarcerated, as she reported she was three months pregnant when she appeared in court last month. The News said that no mention of her pregnancy was made during Friday's court appearance.