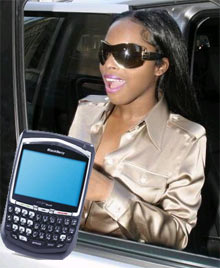 We knew it was too long without hearing about Foxy Brown and her legal woes! A Brooklyn woman is accusing the rapper of throwing her Blackberry in her face. Given Foxy's past brushes with the law, she may be in big trouble.

Arlene Raymond says that on July 30, at Prospect Place and Carleton, Foxy "just ran into me and she just started screaming, 'I hate you, bitch.' And she hit me with her BlackBerry. She just threw it at me." Raymond, who lives on the same St. Marks Avenue block in Prospect Heights as Brown, says that her eye was bleeding and that her tooth was loosened.

The police tell the Post that Brown and Raymond have a history of fighting: Raymond has complained about Brown's car stereo volume. About a week before the Blackberry incident, Brown had allegedly called Raymond "a low-life bitch" and added, "Bitch, you work in a pharmacy. You'll never be nothing," all while at the pharmacy where Raymond works.

Raymond says she wants Brown locked up: "She doesn't treat people right. She doesn't respect anybody. It happens all the time. She's rude. Maybe she thinks people are out to get her." Another neighbor agrees, "She would look at me rude. She would give me a scornful look and I didn't really like it. I just ignored it."

Brown's lawyer, State Senator John Sampson, did not comment on the matter.