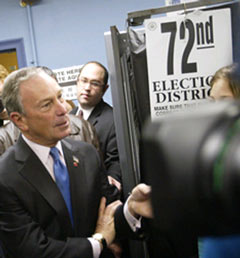 Is Mayor Bloomberg tired of being called a lame duck? A source says the billionaire may consider asking that term limits be revised so he could run for a third time.

The sources says Bloomberg is "50-50" on that idea, which would involve the City Charter being revised. But past talk--from Rudy Giuliani after September 11--of ending term limits has been unpopular. And mayoral spokesman Stu Loeser said, "The mayor is absolutely not seeking a third term."

However, another source explained what Bloomberg wants is to remain relevant, "I wouldn't be surprised if [Bloomberg] made a play for it [a third term], but it would be a play - it wouldn't be serious."

Bloomberg could be feeling restless, now that he's definitely not running for president and his pet project of implementing congestion pricing seems dead after running into the wall that is Assembly Speaker Sheldon Silver. A source said, "Running the [Bloomberg Family] foundation" --the non-profit he has said he will work on after leaving City Hall--"isn't enough."

A spokesman for mayoral hopeful, City Comptroller William Thompson, told the Daily News, "The mayor has repeatedly said that the current term limit is the will of the voters. We take him at his word." Well, of course they hope he'll stick to his word--Bloomberg, who spent $74 million for his 2001 election and $78 million that for his re-election in 2005, would be able to spend the pants off any challenger.

Billionaire Ronald Lauder, who backs the term-limit advocacy group New Yorkers for Term Limits, remains, per the Sun, "100% committed to defending term limits and has every reason to believe the mayor feels the same way." As for Assembly Leader Silver, he doubts the Mayor will run again, "I believe it is his spinner's way of trying to keep him from lame-duck status as long as possible."

#election 2009
#lame duck
#mayor bloomberg
#term limits
Do you know the scoop? Comment below or Send us a Tip