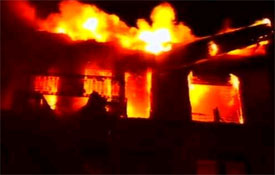 Last night, a fire broke out in an occupied building at 560 West 144th Street around 8 p.m.

Fire officials said the fire started in the six-floor building's fifth floor--which is under renovation--and the fire spread to the 6th floor, by way of a dumbwaiter shaft, with flames "going through the roof." According to ABC 7, there were "large chunks of flaming debris falling onto the street." The FDNY does not think the fire is suspicious, but will conduct an investigation.

Two hundred people were evacuated, and two people were injured during the evacuation. Seven firefighters suffered minor injuries. The 40 families who live in the building were left homeless, after the fire and water damage; the Red Cross helped them find shelter.