A controversial social network popular among neo-Nazis and members of the alt-right has gone offline, for now, days after it was revealed that the suspect accused of opening fire in a Pittsburgh synagogue was a frequent user of the platform—routinely spewing anti-Semitic conspiracy theories, sharing racist memes, and issuing threats that seemed vague until they weren't. "I can't sit by and watch my people get slaughtered," Robert Bowers wrote, moments before allegedly killing 11 Jewish worshipers during a Shabbat service on Saturday. "Screw your optics, I'm going in."

By Monday, Gab had gone dark, replaced with a message from CEO Andrew Torba promising that the site—"the most censored, smeared, and no-platformed startup in history"—would return online soon. Its domain provider, GoDaddy, reportedly gave Gab 24 hours to relocate, after it "discovered" that the site was bursting with content that "promotes and encourages violence against people." Payment processors Stripe and PayPal also pulled their services, citing similar reasons—despite having previously ignored explicit warnings about violent threats issued on Gab. 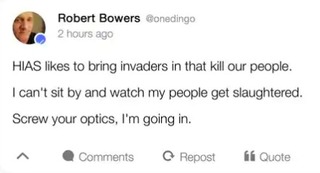 On Tuesday afternoon, the company's verified Twitter account shared an update, claiming that a new host had been secured, and that Gab would likely return to the internet by this weekend, if not sooner. Shortly after, the account posted about how the "lying media is the enemy of The People and of freedom."

The social network, which bills itself as a "free speech" alternative to Twitter, was established in 2016 in response to what its founder saw as left-wing censorship and "ultra-PC culture" afflicting other online spaces. From the outset, it attracted right-wing trolls and explicit white supremacists—many of whom had been banned from Facebook and Twitter, as the networks scrambled to downplay their own roles in stoking extremism and spreading misinformation.

In SEC filings from earlier this year, Gab described its target market as the "over 50 million conservative, libertarian, nationalist, and populist internet users...seeking alternative media platforms like Breitbart.com, DrudgeReport.com, Infowars.com and others." Over 394,000 people used the platform in its first two years, producing more than 1.5 million posts per month, according to site operators.

Early Gab users included well-known neo-Nazis like Richard Spencer and Andrew Anglin, along with former Breitbart editor Milo Yiannopoulos, who'd been kicked off Twitter for inciting racist harassment campaigns (He's set to speak at NYU on Wednesday.) Christopher Cantwell, a white nationalist who was arrested after last year's Unite the Right rally in Charlottesville, Va., is also a committed Gabber. Closer to home, the campaign of Vickie Paladino, a longshot state Senate candidate in Queens, makes use of the platform to recruit volunteers and martial support among far-right individuals.

"It's a meme clearinghouse for people who got thrown off Twitter," explained the candidate's son and campaign director, Thomas Paladino, when asked by Gothamist about his own history of sharing racist and anti-Semitic content. "Any post I've made on Gab has been in the spirit of stirring the pot." Paladino has since suggested that Cesar Sayoc's alleged mail bombing campaign was a false flag, while other Paladino supporters haven't exactly hid their anti-Semitic leanings.

The alleged Pittsburgh shooter's deep hatred toward Jews was even less subtle. After joining Gab in January of this year, Robert Bowers quickly began sharing a range of anti-Semitic content—memes featuring doctored images of Auschwitz, with text reading, "Lies Make Money;" posts condemning the "filthy EVIL jews Bringing the Filthy EVIL Muslims into the Country!!" His bio, which featured a verified blue check mark, declared that "Jews are the children of Satan." His background photo included a reference to "1488," a neo-Nazi slogan used by other mass killers, including those responsible for the Charleston church shooting and the Wisconsin Sikh temple shooting.

That the posts did not trigger any red flags on the platform is hardly a surprise: As anyone who's ever spent any time on Gab can confirm, Bowers's seething hatred and violent fantasies are hardly out of line with a significant portion of the site's content. And after years spent offering bigots a sanctuary and a megaphone for their extremism, the site's founder can't convincingly feign shock when its users follow through on the violence they've long promised.

"The internet is not reality," argues Torba, in a post that currently greets visitors on the site. If it weren't already obvious, the last week in America proves that's far from the case.

#alt right
#gab
#neo-nazis
#social media
Do you know the scoop? Comment below or Send us a Tip