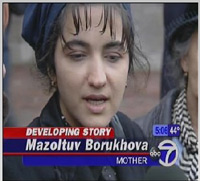 The daughter of Daniel Malakov, the orthodontist who was killed on a playground by a gunman wielding a pistol with a homemade silencer, has been placed in foster care. The girl's physician mother and her family are suspects in the Queens-man's murder. Malakov was shot in front of his daughter in a Queens playground just six days after he'd gained legal custody of his daughter following a bitter custody dispute. A judge at the Queens family court denied custody of the four-year-old girl to her biological mother given the questionable nature of the father's death.

The judge stated that return of the daughter could result in "serious risks of emotional harm if returned to her mother's care." So the girl is off to the custody of the foster care system--probably a worst/best-case scenario for the young girl who just lost her father. According to the Daily News, Malakov's mother-in-law made death threats to the dentist in the final days of a very contentious custody battle.

One of the witnesses in the custody hearing after Malakov's hearing was state senator Diane Savino, who said that the mother and her relatives came to ask her what would happen custodial-wise if "something happens" following a legal resolution to the dispute. That inquiry is now being viewed as an indication of culpability in view of the almost-immediate death of Malakov following his gaining custody.

Cops released a sketch of the suspected shooter in the case this week.