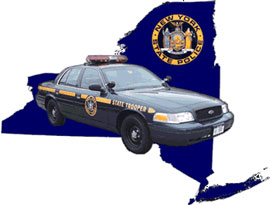 It was Berwick's 12-year-old daughter who found him in their Albany garage, "after disregarding a note left on the door telling her not to enter." Governor Pataki told the AP, "My family is just devastated. He was an ultimate professional who put his life on the line to protect us."

The NY State Police has been under a lot of scrutiny lately, after last summer's Troopergate scandal and the Attorney General's investigation. While it did not appear Berwick was targeted in the probe, the Post reports, according to a source, that Berwick was recently concerned about it. Another source says Berwick would have definitely been interviewed about the state police's antics which allegedly included spying on both Republican and Democratic lawmakers.

#Gary Berwick
#ny state police
#suicide
#Troopergate
Do you know the scoop? Comment below or Send us a Tip