A former manager at The Standard Hotel in the Meatpacking District has filed a $10 million discrimination lawsuit against the hotel, accusing higher-ups of wrongfully terminating her in part because she gave birth in one of the rooms. Tara Kimkee Tan, 42, worked at The Standard for four years before they fired her in August, supposedly for stealing some office supplies 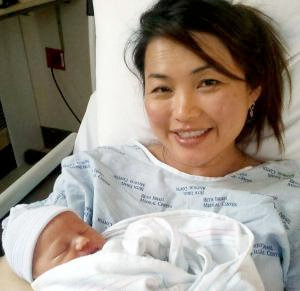 Tan with the baby that was born at The Standard. Something tells us she didn't name the child "Stan."

But Tan claims she was told by upper management that she “did not possess the physical attributes to work at the hotel because at over 40 years of age and having recently given birth to two children she was, so far as defendants were concerned, not young, thin of model-like proportions, or one of ‘the beautiful people’ desired at the hotel." There was also that one time she gave birth in one of the rooms.

Tan says she was denied maternity leave and was working at the hotel when she went into labor one night in April. By the time her husband arrived from NJ, she was well on her way to giving birth after laboring alone in the room for two hours. According to the lawsuit, "the hotel offered no assistance to (Tan) while in labor, afraid that it would disrupt its Friday night club scene and partying." After her husband delivered the baby, Tan and her family were escorted out a side door, the lawsuit alleges.

Three days later, Tan was back at work, though she claims the hotel docked her pay for the days she was out. Four months later, she was terminated. “I am upset that they treated me this way after all that I did for them,” Tan tells the Daily News. “I helped them build this hotel and make it a success. I sacrificed so much time with my family.” A spokesperson for the hotel has not responded to requests for comment.