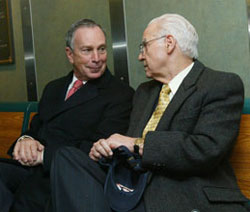 It's the case of Guy Molinari vs. Michael Bloomberg: Former Staten Island Borough President Molinari tells the Advance he will be the "lead plaintiff in the civil action against Mayor Michael Bloomberg, who sought the extension to three terms."

Molinari took exception to the fact that the term limits extension was passed, without a voter referendum (while there were two public referenda in 1993 and 1996 to limit terms to two), "This has nothing to do with the competency of the mayor. The people have spoken, and we have to adhere to what the people have said." Molinari added, "Despite the feelings I have for Mike"--they are friends--"if you don't agree with someone, and you really believe it, you should have the ability and the strength to go public with it."

Intriguingly, current S.I. Beep and Molinari's "longtime ally" (not to mention former aide) James Molinaro supports the term limits extension, noting that, "Eight years is just not enough. Twelve years is a necessity for have an effective person in office."

The Advance reports that other plaintiffs include City Council members Charles Barron, Bill deBlasio and Letitia James, Public Advocate Betsy Gotbaum, and NYPIRG. Fun fact: Apparently Molinari was chosen as the lead plaintiff because he successfully sued to get John McCain on the state GOP Primary back in 2000.