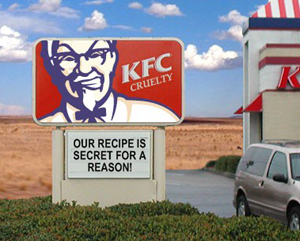 A security firm run by former New York City police detective Bo Dietl has been hired by KFC to move the fast food chain's secret "Original Recipe" of 11 herbs and spices, which has been not been moved from its safe in corporate headquarters for 68 years. The single sheet of notebook paper, yellowed by age, lays out the entire formula, and was written in pencil and signed by Colonel Harland Sanders in 1940.

The recipe is considered so valuable that KFC has sent out a press release informing the whole world about the move, which executives say is part of a "security modernization project" to be overseen by Dietl, who will receive backup from the Louisville Metro Police Department as he carefully removes the recipe from the safe, locks it into a briefcase handcuffed to his wrist, and transports it from KFC headquarters in a Brink's armored car to an undisclosed location for safekeeping.

Lest any of you cynics out there think this is just some shameless publicity stunt, KFC has gone one step further and offered to safeguard your secrets as well. Just type in a secret—say, "one secret ingredient is arsenic"—and the company will store it for you in their digital safe, free of charge.

#chicken
#fast
#food
#kentucky fried chicken
#kfc
#nypd
#recipe
#safe
#security
Do you know the scoop? Comment below or Send us a Tip
A new Gothamist is coming! We’ve moved comments over to our beta site. Click here to join the conversation and get a preview of our new website.