Prior to the U.S. entering WWII, there was a fairly strong Nazi presence in certain pockets of New York, and the most Nazi of them all was Yaphank, a "pro-Hitler community" located in the middle of Long Island. The streets there were named after Hitler, Goering, and Goebbels. There were Nazi parades marching through quaint suburbia. And it was home to "Camp Siegfried," where children imitated the Hitler Youth. 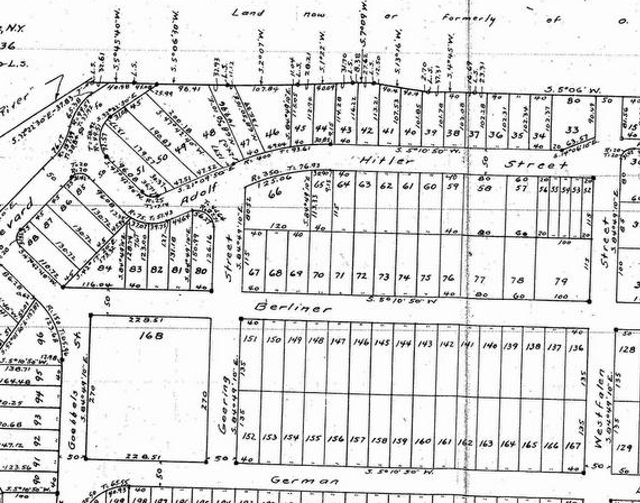 A 1980s NY Times article explained that from 1935 until it closed, the camp "was a favorite recreation center for German-American families living in the New York City area," there was even a Camp Siegfried Special train courtesy of the LIRR. The camp was a focal point of the Nazi movement here (all those saboteurs), and while the American flag was present on the grounds, it was greeted with a Nazi Salute—after all, one attendee said, it would eventually be the American salute. In the late 1930s, "Camp Siegfried officials were indicted on charges of violating the New York State Civil Rights Act."

While street names were eventually changed, today the NY Times reported that at least one bylaw has not. Philip Kneer and Patricia Flynn-Kneer, who are currently unable to sell their home there, have just filed suit, challenging a bylaw that demands homeowners in the area be of "German extraction."

While the parades are gone and the streets have been renamed, one thing has not changed: The original owners of this tract of land kept a clause in its bylaws requiring the homeowners to be primarily “of German extraction.” That has kept this community of 45 families almost entirely white.

[The Keers] are suing the community organization that owns the land under their house, the German American Settlement League, alleging that the league’s housing practices are discriminatory and violate the Fair Housing Act.

“You feel like a caged animal here,” Mr. Kneer told the paper.