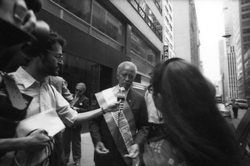 Mayor David Dinkins, who preceded Mayor Giuliani in office from 1990 to 1993, had his appendix removed in an emergency surgery Friday when it was determined that he was suffering from appendicitis. Dinkins was actually visiting his doctor for a routine flu shot, when he complained that he had a sharp pain in his side. A CAT scan revealed the inflamed and infected appendix--a condition that can be lethal if the vestigial organ bursts.

Dinkins is expected to be released from the hospital after the successful surgery Monday or Tuesday, and he sounded pleased with his experience at New York-Presbyterian Hospitall Weill Cornell. "I could not have been treated better. I'm just a little hoarse." That's almost how Assemblyman Denny Farrell described the former mayor. "He's a horse. I'm worried he'll want to go play tennis tomorrow." Dinkins, who plays tennis five days a week, actually said that he can't wait to get out of the hospital and back on the tennis court.

Police Commissioner Ray Kelly spent three hours visiting with Dinkins in the hospital. Kelly first served as NYC's police commissioner in the Dinkins administration. He was replaced by William Bratton after Dinkins was defeated by Giuliani in the next mayoral election. U.S. Congressman Charles Rangel also spent an hour with Dinkins.