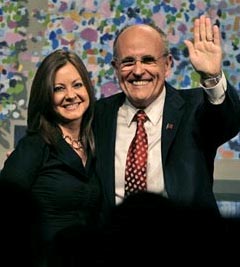 The travails of Russell Harding, former Rudy Giuliani-appointed head of the NYC Housing Development Corporation have been well documented, especially in the Village Voice. Harding, who billed the city for his personal travels, dining, and a vehicle and whose computer was found with child pornography on it, is out of prison and seemingly ready to settle some scores.

The NY Times notes that Harding's new website, Rudy Veritas is unsparing in criticism about the former mayor. But the article (which reminds us that Harding's inclusion in the Giuliani administration was "widely viewed as a political favor to his father, Raymond B. Harding, a former leader of the New York Liberal Party") also suggests that Harding may be upset that Giuliani and his associates aren't assisting him financially.

At any rate, Rudy Veritas makes for some fun reading. For instance, here's Harding's take on how Rudy's then-chief of staff, Anthony Carbonetti, asked him to find a cheap rental apartment for Judi Nathan.

WHOA! I took a very long pause. I then repeated back the specs he had just given me -with dripping sarcasm - to be clear that I understood him correctly. “Are you out of your fucking mind? That apartment you just described costs $3200-3700 a month. A developer would be taking a hit (I paused to think) of around $25 thousand a year. With a multi-year lease — my God — these are cheap bastards,” I said.

Harding goes on to say that Carbonetti told him, "She wants a choice... She wants to choose from a few different apartments and buildings, so you have to give her a selection." Harding's reaction, “Jesus fucking Christ! For $1500???” but then said, "I think I do know someone who’ll do this, but there’s one thing; I’ve never asked any developer here for anything like this, for myself or anyone else. I need to say this request comes from ‘On High’ or from City Hall. I won’t say Rudy or you. I’ll be vague, but I need to say ‘You over there.'"

Which Carbonetti allegedly agreed to, so Harding contacted the developer, The Related Companies. And while Related had no comment for the Times, another real estate executive told the Times, "When City Hall calls, what are you going to do?" Giuliani's spokeswoman claims the current Mrs. Giulani "paid midmarket rent for the apartment and paid for a parking space that accompanied it." (There's some suggestion she got free parking.) If she had a parking space, then why was the NYPD her taxi?

Other funny stories: How Rudy allegedly snubbed Mike Huckabee and how Carbonetti's girlfriend kept offering Cindy McCain painkillers during a trip in Vegas.