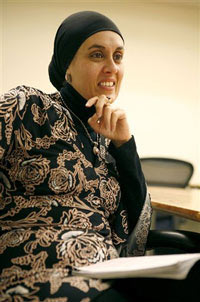 Debbie Almontaser was publicly drummed out of her job as the founder and principal of the Khalil Gibran International Academy, but she is now the one on the receiving end of a defamation lawsuit filed by members of an organization who attempted to prevent the dual-language school from opening. Sara Springer, Irene Alter and Pamela Hall are members of a group called the Stop the Madrassa Coalition. They're alleging that they were defamed by Almontaser, who said that critics of the school were stalking her.

Rabbi Michael Feinberg, a member of Communities in Support of KGIA, a group devoted to having Ms. Almontaser reinstated as the school principal, said: “They picked this whole fight from Day 1. I don’t know if they stalked her or not. But they have been absolutely relentless in the campaign of lies, distortions and calumny to shut down the school and have Debbie step down as principal.”

Critics of the school's opening characterized it as a terrorist training academy and a school meant to religiously indoctrinate children in radical Islamism. Khalil Gibran was actually a Lebanese Christian who was educated in Boston; and naming the school after him was supposed to be emblematic of intercultural understanding.