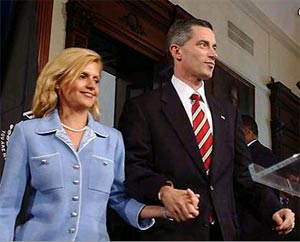 The NY Post has an "explosive interview" with disgraced former NJ Governor James McGreevey's old driver and aide, who claims he had many "three-way sex romps" with McGreevey and his wife Dina Matos. Teddy Pederson is speaking out because Matos has been talking about Governor Spitzer's scandal, "It's frustrating to hear her call Gov. Spitzer a hypocrite while she's out there being as dishonest as anyone could be about her own life... She's framed herself as a victim - yet she was a willing participant, she had complete control over what happened in her relationship."

Back when McGreevey was mayor of Woodbridge, NJ, Pederson was hired as a driver. Soon, he says he and the couple were involved:

"He liked watching me, and she would watch me while she was [performing sex acts] with Jim," noted Pedersen. "In my opinion, me being a part of their sexual relationship enhanced it for both of them."

Matos and McGreevey were not yet married in the 1990s when the ménages à trois allegedly began, but they continued after their marriage up until McGreevey was elected governor, according to Pederson. 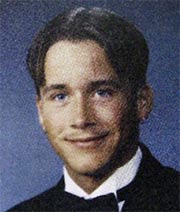 Pederson, who now has a girlfriend of seven years, tells the Post he's talking because Matos' lawyers subpoenaed him in the very messy divorce, "I would have kept my mouth shut about this forever, but she subpoenaed me, and now it's all going to come out at trial."

The Star-Ledger, which Pederson also contacted to tell his story, notes "At the core of the case is Matos McGreevey's claim that McGreevey defrauded her by hiding his homosexuality from her before and during their marriage," as well as "None of Pedersen's claims could be independently verified." However, Matos did mention Pederson in her book on - on the second page. From the Star-Ledger:

Matos McGreevey describes her surprise at arriving at McGreevey's condo before a romantic weekend getaway only to find Pedersen in the parking lot.

"I turned to Jim. 'What's Teddy doing here?' Teddy Pedersen, a handsome college student at Rutgers University, was Jim's campaign driver, one of a crowd of guys in their twenties who always seemed to be around. I came to think of them as the Lost Boys," she writes.

Pederson claims that when on business trips, he, McGreevey and Matos shared one hotel room, puzzling other staffers. Plus, the Friday Night Specials turned into something else in 2000, when the three spent Saturday mornings together: "I'd go to the condo, and usually they'd still be in bed. I'd sometimes go up, sit on the edge of the bed, rub Dina's legs through the comforter and go from there. Saturdays were a lot more low-key."

McGreevey stepped down as NJ governor on August 13, 2004, citing his affair. He and Matos have each written books and made a number of media appearances. On Oprah, Matos said on the day McGreevey told her about his gay affair, right before the press conference, "He was telling me what to do, and he said, 'You have to be Jackie Kennedy today.' And I'm thinking, 'Jackie Kennedy—her husband was murdered. You lied and cheated on me, and I have to be Jackie Kennedy?'"

And Matos and McGreevey are scheduled to be back in divorce court this week, so it's not just a stroke of special scandal-of-governors timing. Or is it?