Forget it, Bloomberg, It's Albany 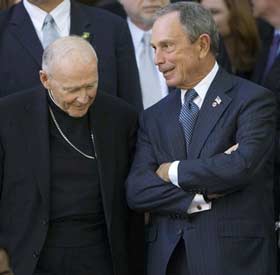 What's a Mayor to do? When he's not trying to quiet rumors that he has a bad relationship with Albany, Mayor Bloomberg is still getting shafted by Albany. The NY Times describes the latest indignity: How a city proposal for bus-only traffic lane enforcement was shot down.

The bill, which would have put cameras on the new rapid transit buses (the whole bus rapid transit system will be complete by 2011) to catch cars the use bus-only lanes, was co-sponsored by six Democratic Assembly members who later, per the Times, "voted not to move it out of the Assembly’s Transportation Committee because the panel’s chairman, Assemblyman David F. Gantt, also a Democrat, opposed the measure."

Mr. Gantt, who is from Rochester, has long opposed the use of cameras for law enforcement, but recently he reversed course by introducing a bill that would allow for red light cameras in Buffalo. The bill was drafted to favor a type of traffic-monitoring technology made by a company run by his former counsel.

He brushed off a question about whether he had sought to influence the votes of other committee members on the bus bill.

“What do you think, I go around breaking people’s arms?” he said.

Guh. In other Albany news, the union-backed bills with financials from the "voodoo" actuary who was actually on union payrolls won't go through this session and Senate Republicans are going to support Governor Paterson's tax cap proposal for schools.