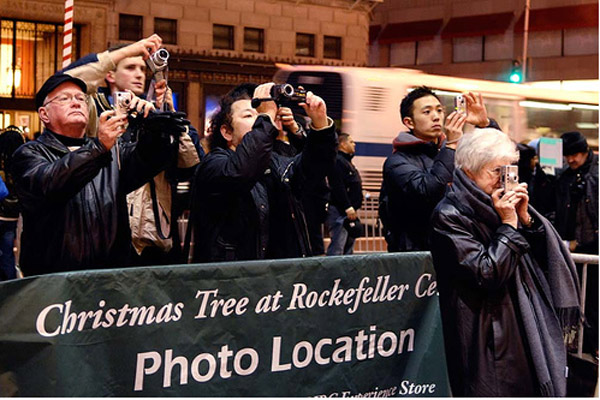 New York City has a buoy helping it resist the receding economic tide: Tourists. In particular, foreign tourists who are relatively flush with currency that has strengthened against the American dollar. The city's marketing agency NYC & Company says tourism increased by one million visitors during the first quarter of 2008 versus the same period in 2007, and that 20% of those visitors arrived from abroad. And last year a record 46 million visited the city!

According to the NY Times, restaurateur Danny Meyer added the Euro equivalent prices to his wine list to highlight the comparative bargains European tourists were getting while imbibing. Meyer said he's been selling more and pricier wines at The Modern, his restaurant in the MoMA. And hotels are enjoying record occupancy rates, in spite of an average price of $270/night. Some smaller stores are even accepting Euros.

Since foreign visitors to cities like Chicago and Los Angeles have dropped sharply, never quite recovering from a post-September 11 falloff, it's not all about the weak dollar. The city's lower crime rate and general gentrification have made NYC a more appealing vacation destination. Also, the City's been actively courting foreign tourists with an international promotional campaign. But tourists should know: If they get sick, ACS might take their kids.