Forecast: The Return Of Winter

Winter has roared back following the passage of a cold front in the early morning hours last night. Today's high was 50 degrees at midnight, before the front arrived. Now that a cold air mass is moving in it looks like the temperature will stay in the mid 30s all afternoon before dipping to the lower 20s overnight. Strong northwest winds will push the wind chill down to 20-25 degrees for the daytime hours and to the lower teens tonight. The temperature will recover to the lower 40s tomorrow, but it will still be windy, and that is still ten degrees cooler than normal. 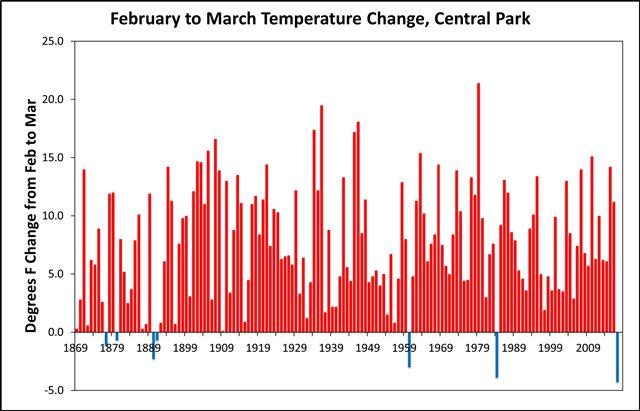 While this month isn't anywhere near the coldest March on record—that honor goes to 1888, which averaged 30 degrees—we are witnessing a rare climate event. On average, March is almost eight degrees warmer than February. This year, for the first time since 1984 and only the seventh time since records began in 1869, March will be colder than the February that preceded it. So far this month has been 4.3 degrees colder than last month. While warmer weather in the next few days will close that gap it won't be enough to overcome the month-long chillfest.

The cold high pressure system will move offshore tomorrow night, giving rise to a warm front passage and southerly air flow on Friday. Friday's high will be near 50 with a slight chance of rain in the afternoon. Saturday should warm to near 60 before a cold front cools us down to the mid 40s on Sunday. However, the jet stream will be more zonal, flowing west to east, by that time, preventing any serious cold air outbreaks.

#march
#spring
#winter
Do you know the scoop? Comment below or Send us a Tip