I drove down to Florida a couple of weeks ago. About halfway through North Carolina I noticed that the leaves were starting to come out on some of the trees. While the growing season obviously starts earlier to our south, mid-February seemed awfully early to me. Turns out that was true. According to the US National Phenology Network, which keeps track of things like when leaf out begins, trees across the South are putting out leaves about three weeks ahead of schedule. Looking at the map above, as of yesterday spring leaves are starting to be seen as far north as DC and southern Maryland. Has anyone seen trees in the city putting out leaves? 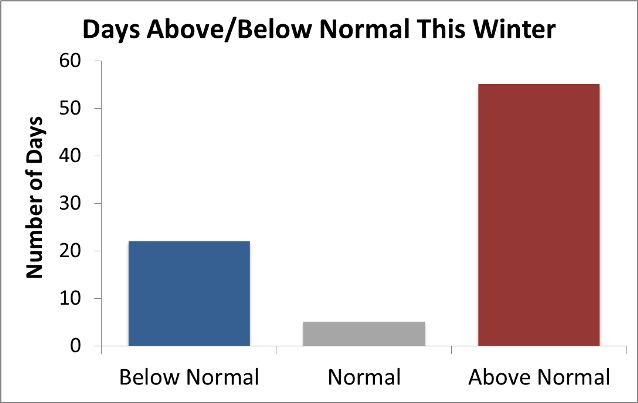 Warm days have been 2.5 times more frequent than cold days this winter

Despite a short cold spell in January and a couple of snowstorms, this winter has been remarkably warm. Since December 1st there have been 55 warmer-than-normal days and only 22 days cooler than average. While yesterday's high of 65 in Central Park fell one degree shy of breaking a record, every other climate station in the area set a new record.

Warm weather is expected to last for at least the next week. We'll warm to the lower 50s today under sunny skies. Tomorrow looks to be the coolest day of the week with a high only in the mid 40s. A weak warm front will approach tomorrow night, giving us a chance of showers, but following that frontal passage Wednesday should warm to the upper 50s and the temperature will rise to the upper 60s on Thursday. Upper 50s should be the story for Friday and Saturday before a cold front possibly brings thunderstorms late on Saturday and slightly cooler weather on Sunday.

#freaky
#spring
#warm
#weather
Do you know the scoop? Comment below or Send us a Tip