Forecast: Now With The Freezing Rain

The deep freeze that began late last week and reached a record-breaking nadir yesterday is just about over. A warm front is quickly approaching from the south and that will push the temperature above freezing for the first time since last Wednesday.

We'll see some light snow this afternoon, perhaps totaling an inch or so of accumulation. More worrisome is that the air is going to warm much faster than the ground. The snow will change over to rain that will turn to ice when it hits the frozen ground. We could see several hours of freezing rain this evening, which could make for treacherous travel conditions, whether you're walking, biking or driving.

The temperature will continue to rise overnight as the warm front passes and we get into the warm sector of the storm. Tuesday's high will be in the mid 50s and it's going to be soggy. Look for rain, possibly heavy in the afternoon, lasting through the late evening hours.

A cold front passage will put an end to the rain late Tuesday and will usher in a few days of cooler weather. Wednesday's high is expected to be in the mid 40s, while the lower 40s, which is about normal for mid-February, are likely toward the end of the week. Look for the temperature to return to the 50s for the weekend. 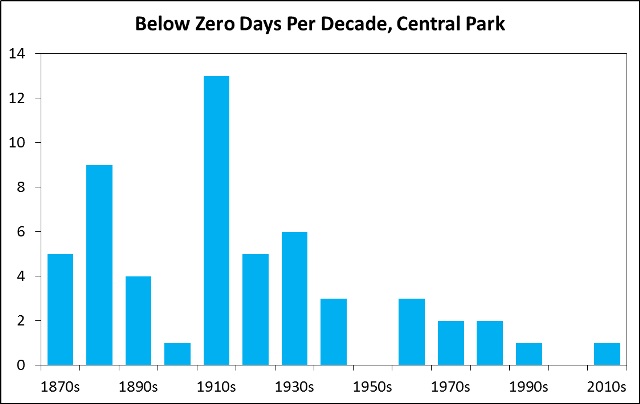 To put yesterday's frigid weather in perspective, New York City doesn't get many days with below zero temperatures. The Appalachians to our west and the ocean to our east both work to block us from really cold air outbreaks. Since Central Park weather observations began in 1869 the temperature has gone negative only 55 times, slightly more than once every three years. The worst offender was 1914, with four days below zero. As a decade the 1910s have by far the most below zero days with 13. We've only had twelve below zero days in the last eighty years!

#freezing rain
#rain
#weather
Do you know the scoop? Comment below or Send us a Tip
A new Gothamist is coming! We’ve moved comments over to our beta site. Click here to join the conversation and get a preview of our new website.