A small thunderstorm passed through the city this morning, dousing people with water and setting off a flash flood warning for much of the city. The storm cell was intense enough to dump three-quarters of an inch of rain at LaGuardia, but small enough that JFK received almost nothing and only 0.15 inches were measured in Central Park. A few of us were lucky enough to see a double rainbow for a few minutes. With the morning's storm out of the way there is only a slight chance of rain from now until late tonight. This afternoon's high will be in the mid 80s with plenty of humidity.

This morning's storm is a sign that the Bermuda High is slipping eastward. The next sign will be tonight when an upper level trough and a warm front approaching on the ground will likely produce more widespread showers and thunderstorms. The best chance of rain will be overnight but showers could linger until a cold front passes tomorrow afternoon. The humidity will drop sharply behind the cold front, but Saturday's high will still reach the lower to mid 80s. 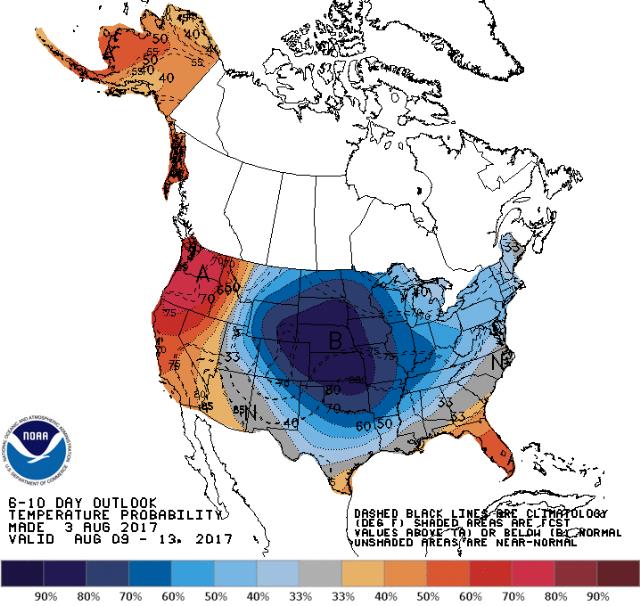 Next week's temperature outlook from the National Weather Service

A long stretch of cooler than normal weather will begin on Sunday. That big blob of cool air forecast to be over the Midwest next week in the map above will get diffused a bit as it heads south and east, but we are in for a week or more of highs in the mid to upper 70s. Monday looks to be the coolest, wettest day of the week with a high only around 75 and a good chance of rain all day. The rest of the week doesn't look like it will be nearly as wet.

#humid
#showers
#thunderstorm
#weather
Do you know the scoop? Comment below or Send us a Tip