After several weeks of heat and humidity a much cooler and drier air mass reached the city early this morning. The temperature dipped below 70 degrees this morning for the first time in three weeks. While today's high will be near the normal of 82, tonight's low should be in the low 60s in the city and possibly the lower 50s not too far north of here.

Plotting the hourly temperature and dew point observations from Central Park from over the weekend shows the reason for tonight's cool weather. The plunging dew points show the atmosphere rapidly drying out, and with little moisture in the air there is not much to stop the energy radiated by the ground surface from escaping to space. Also on the graph you can see when the air became saturated during the three rain episodes and a good example of vertical mixing yesterday. 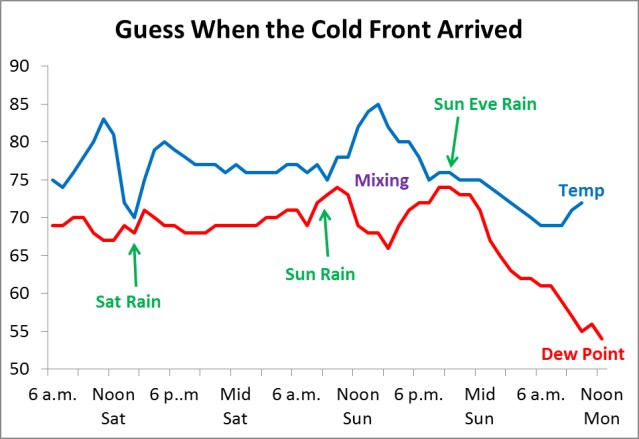 Sunday's humidity was mostly confined to the lowest mile or so of the atmosphere. As the sun heated the ground during the day that layer of hot, humid air just above the surface became buoyant and rose upward. In doing so the dry air the surface layer was displacing got pushed downward, resulting in the mirror image temperature and dew point curves for the day.

This dry air mass covers the country east of the Rockies so we can look forward to mostly clear skies for the remainder of the week. The humidity should stay low through at least Wednesday, but it will slowly increase after that. Afternoon highs will rise from the low 80s today and tomorrow to the mid 80s in the middle of the week, and finally to the humid upper 80s on Friday. Friday will also be the next chance for precipitation as a weak cold front begins to push the high pressure system out to sea.

#dry
#sunny
#weather
Do you know the scoop? Comment below or Send us a Tip
A new Gothamist is coming! We’ve moved comments over to our beta site. Click here to join the conversation and get a preview of our new website.