Forecast: If You Think It's Cold Now, Oh Just You Wait...

A high pressure system crossing over the region this morning allowed the temperature to drop to the mid teens with a wind chill in the single digits. The temperature might rebound to the lower 20s this afternoon as the high slides off into the Atlantic, but the wind chill will remain near 10 degrees.

The real cold arrives tonight on the heels of an Arctic front. The temperature on Saturday will drop from the upper teens near midnight down to near ten degrees by sunset. A strong northwesterly wind will keep the wind chill below zero all day tomorrow. As the winds continue and the temperature continues to drop, wind chill values will be between 10 and 20 degrees below zero on Saturday night. These are dangerously low values, and the National Weather Service has issued a Wind Chill Advisory for the city that is in effect from tomorrow afternoon through noon on Sunday. If you must go outside, dress warmly and cover any exposed skin as prolonged exposure to wind chills that low may cause frostbite.

A bit further inland, the lower Hudson Valley, northern New Jersey, and much of Connecticut are expected to have temperatures in the single digits and wind chills in the -25 to -30 degree range. Being outside in those conditions can quickly lead to frostbite, hypothermia and even death if you aren't properly dressed.

The temperature is expected to bottom out near the record low of two degrees on Sunday morning, and dropping below zero for the first time in more than two decades is not out of the question. The wind will calm down as the day progresses on Sunday but the Valentine's Day high will only reach the upper teens. 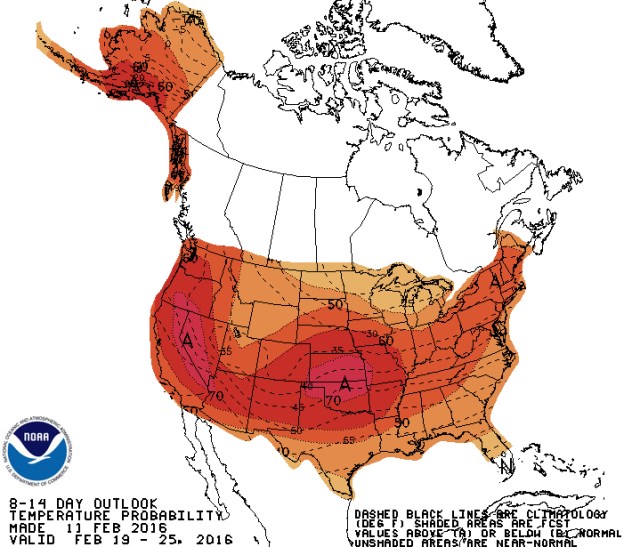 For President's Day we should have a high in the mid 30s with some snow changing to rain later in the day. Tuesday's high is expected to reach 50 degrees. Beyond that, as the map shows, it looks like the whole country will be running a bit warmer than normal for at least the next couple of weeks.

#cold
#frostbite
#weather
#wind chill
#wind chill advisory
Do you know the scoop? Comment below or Send us a Tip