Forecast: Chilly Today But You Can Wear Shorts Again Wednesday

We may have missed out on the nine inches of snow over the weekend but we did have our coolest weather since last spring. Sunday's high only reached 49 degrees in Manhattan and this morning's low was a chilly 35. We'll be lucky to top 50 degrees today, but warmer weather is on the way as high pressure moves offshore and the winds swing around and start coming out of the west and southwest. Tuesday's high is expected to be in the mid 60s, a couple of degrees warmer than normal.

A cold front will pass late Tuesday night, which you might think would call for a cold Wednesday, but the jet stream will recede northward allowing warmer air to infiltrate. The end result is that Wednesday and Thursday should warm to the lower 70s. Another cold front late Thursday night will give us a cool Friday with a high in the upper 50s but we'll see a warming trend over the weekend. 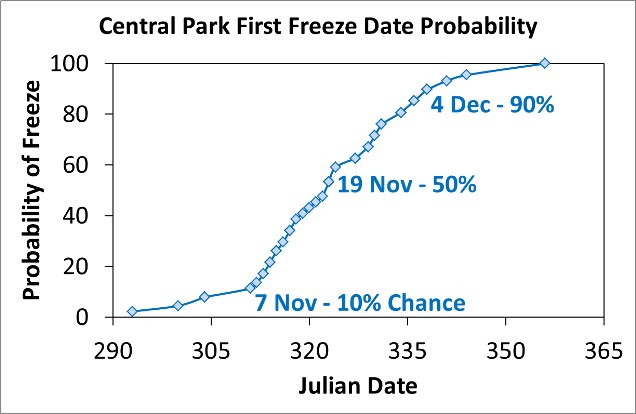 The near freezing conditions this morning got us wondering about when we should expect the first actual freeze. The earliest first freeze since 1971 was October 20th, 1974 and it is very rare for Central Park to go below the freezing mark before the first week of November. Things really cool down between the 7th and 19th of November. The first freeze last year was November 19th, which is the median date for that to happen. Except for a couple of outliers the temperature almost always dips to freezing by early December.