Forecast: Briefly Cool Start To November After The Warmest October Ever

It's official: we just experienced the warmest October since temperature observations began in Central Park just after the Civil War, and the eighth straight warmer-than-average October. Last month's average of 64.1 degrees was a half-degree higher than the previous record years of 1947 and 2007. Fourteen days were at least ten degrees warmer than the 30-year average and only three days were cooler than that average. The prolonged warming actually began in mid-September, with 44 of the last 49 days being warmer than normal. 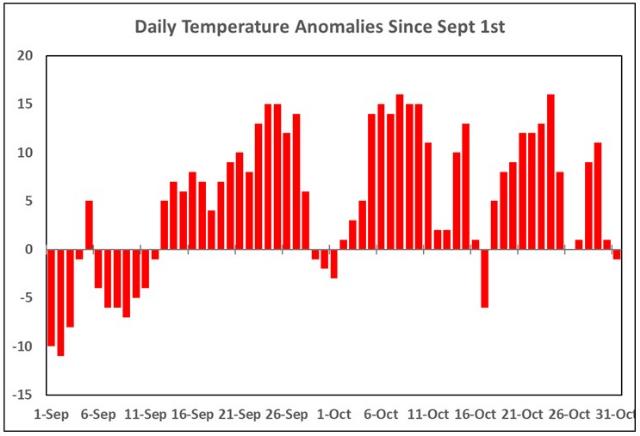 While November will begin with decidedly normal temperatures today—look for a high very close to the average of 59—the warm weather will return tomorrow. A warm front is slowly approaching from the south and is expected to pass through the region late tonight. We may see a few light showers overnight but it will definitely be warmer for the next couple of days. Thursday and Friday will see highs in the lower 70s.

The steady warmth of the past six weeks was supported by an upper level ridge. That's not the case anymore as jet stream has shifted to a zonal pattern, which favors a quick succession of fronts. A cold front will pass on Friday, which should drop the temperature back down to near normal on Saturday and Sunday. Light rain is possible during the marathon on Sunday morning. Yet another brief warming is expected early next week before what currently looks like an extended period of cooler weather sets in.

#cloudy
#cool
#weather
Do you know the scoop? Comment below or Send us a Tip