Last year, you may recall that NYU students discovered just what happens when you accidentally hit "reply-all" on an email sent to the entire school. NYU survived that bumpy roller coaster ride of amusement and aggravation—but now Fordham University students have also entered the self-reflexive chain mail matrix today. "Fordham accidentally did the same thing that NYU did, by including a university-wide 'all-student' email address in the CC section of a message, instead of the BCC Section," Fordham student Nicholas Espinoza told us. "About 100 emails in the past 5 mins. Keeps ramping up." 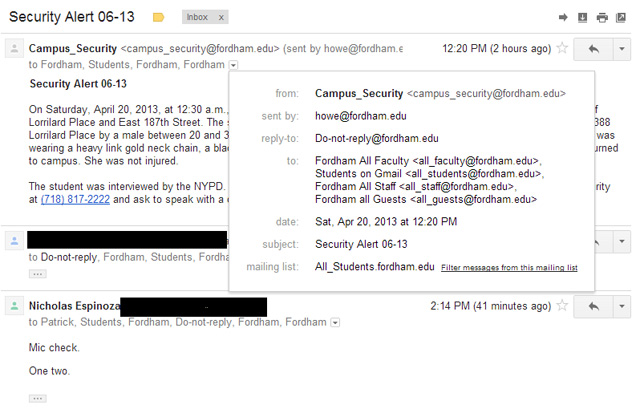 "Approximately 120 emails were sent to the entire school system before the Fordham IT/Communications team disabled the service, with some emails trickling in (not sure why)," Espinoza added. While Fordham may not have 40K+ students like NYU, around 7,000 students have been alternatively titillated and irritated by the mass emails that have streamed in. 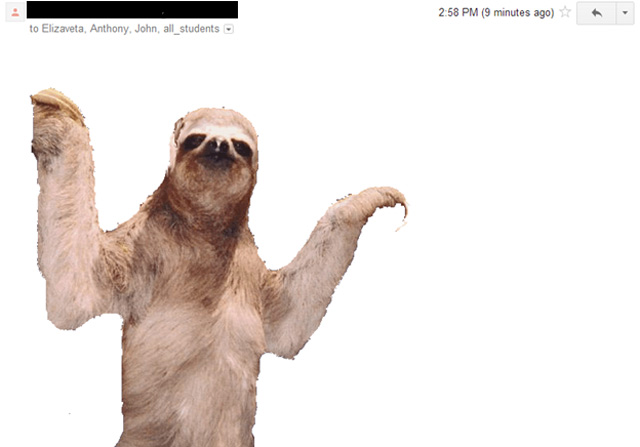 Although Espinoza said the first response he saw was from one Patrick Meaney, senior Lucas Bifera took credit for starting the reply-all chain to The Fordham Observer, saying his curiosity about the "all_students@fordham.edu" address has been building up for three years: “It wasn’t even an impulse. It was years and years of thought and curiosity that, today, culminated in this email.” 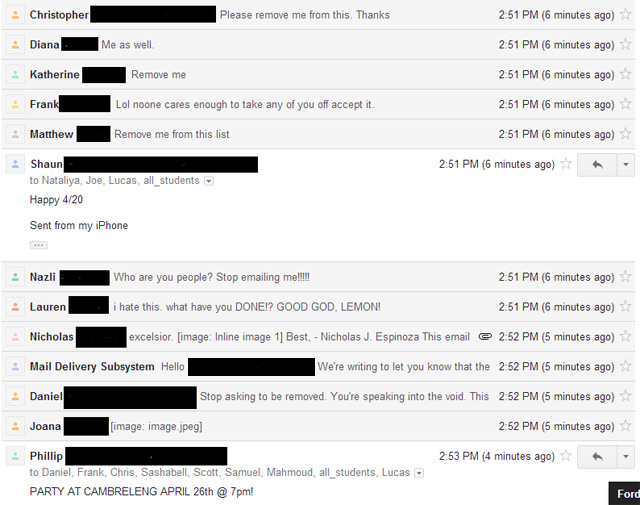 Bifera says he's received quite a bit of feedback from his classmates about the email chain: “I have also got some phone calls from people who have told me to get a hobby and get a girl friend, of which I have several,” Bifera said. Most of the responses though have been requests to remove them from the list: “It seems like most people are just generally interested in being removed from the list, although you would think that the Fordham students, given that we are all on computers all day, would be able to discern that all_students@fordham.edu would be a list you could not be removed from.” 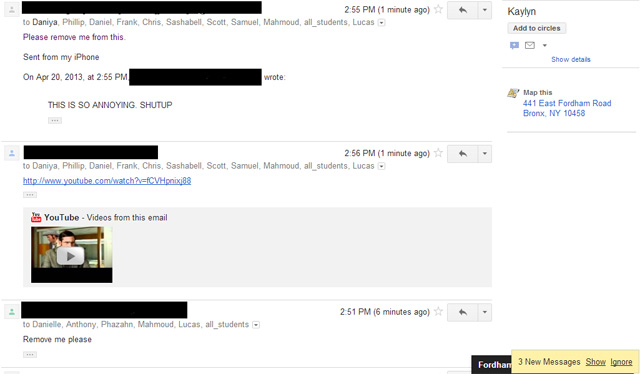 Update: Fordham University has sent out an email update to students explaining that the situation is now under control.

Please be advised that Fordham experienced an unfortunate episode earlier today which lasted approximately an hour, when a student used the account "all_students@fordham.edu" to blast an email out to all who are part of this list. The student was able to do this because of a misconfiguration of this group account, and as many of you witnessed, others joined in. No security was breached and no hacking of group accounts has occurred. This problem has now been resolved.

We apologize for any inconvenience that you may have experienced and assure you that this situation is now under control.

#email
#fordham
#fordham university
#reply all
#original
Do you know the scoop? Comment below or Send us a Tip