For Sale, Again: 26 Acres of West Side Railyards 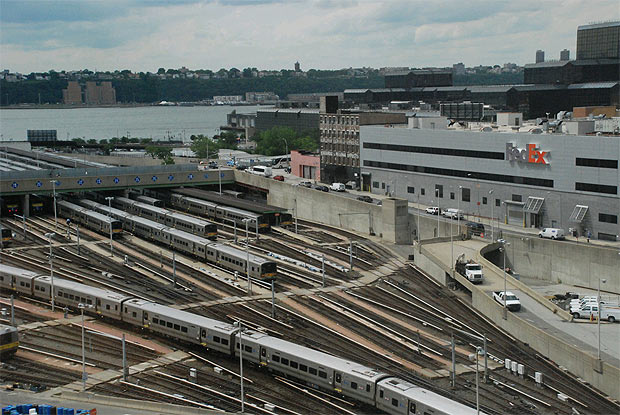 This morning, Governor Eliot Spitzer is announcing the sale of the West Side Railyards. The NY Times reports that the state and MTA will "formally begin soliciting bids for the development rights." Boy, does this bring us back to 2005. Of course, developers will need a boatload of patience and a boatload of money - the land was appraised last September to be worth $1.5 billion and it's estimated to cost $1 billion to simply build a platform over the railyards.

The city hopes to put lots of huge buildings on the land - back in May, the Times wrote, "the Bloomberg administration envisions the equivalent of five Empire State Buildings rising." From today's Times article:

Under the current plan, developers could build a total of about 12 million square feet of residential and commercial space. Prospective buyers would be able to bid on one or both of the railyards. Bidders would also have to submit offers with and without the High Line.

And developers who build rental apartments will be required to permanently set aside 20 percent of the units for low- and moderate-income tenants, said officials who have seen the bidding documents. The Bloomberg administration has also earmarked $40 million for the development of affordable housing on two city-owned sites nearby.

The developers will also need to deal with the community, as well as city and state promises that things like the Moynihan station, 7 extension, and Jacob Javits center continue their progress.

We've included some earlier info from the Hudson Yards Development Corp. after the jump.

Photograph of the West Side railyards by Triborough on Flickr

From the Hudson Yards Development Corporation: Off-site locations:
- West 54th Street / MTA Site
- West 48th Street / DEP Site
- Plan will include a PS/IS school
- Plan will include office space for arts and non-profit uses
- Parking will be allowed, but not required, for WRY site
- Plans should incorporate green building standards
- WRY development plans are subject to ULURP and environmental review
- Guidelines should be flexible and promote compelling architectural design