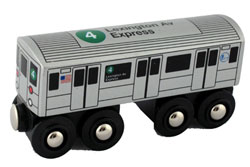 Just what everybody needs to end the day...a subway shutdown! No, it's not due to the system flooding, but because of a police investigation.

Due to the police investigation on the 4/5/6, the line is shut down in both directions from 96th Street Station and 125th Street Station. From preliminary reports Gothamist is getting, the suspect the police are looking for is in the subway tunnel between 116th and 125th Streets. The suspect allegedly claimed he had a weapon and robbed a restaurant before fleeing into the subway. He was headed northbound on the downtown tracks.

We're told that there are severe delays even outside the affected area. It seems like there is major congestion on the line and the subway conductors are recommending alternate lines to get to your destination. Good luck on the buses, as there are long lines due to the 4/5/6 not running.

UPDATE: The MTA says that 4/5/6 service has resumed with residual delays.