For One Week, I Kept A Diary Documenting My Subway Commutes

New York City's subway system has been having a bit of a rough time lately, and to illustrate some of the problems riders face day after day, last week I decided to document a week's worth of my subway commutes. Some were good, some were bad, some were in-between, and almost all were soundtracked by Lorde. Here's what happened:

Morning: I went home for the weekend for Father's Day, so I'm looking forward to this morning's commute, which is typically an 18-minute door-to-door journey from my family's apartment on the Upper West Side to Gothamist's new home in Midtown (I live in Prospect Heights). But this is the Summer of Subway Hell, and the MTA's website looks like this:

There's police activity somewhere on the 2 train, so my 1 train is full of people homesick for the express. On the bright side, the local is running on time, and for me it's a short ride, even though I have to spend it nestled up against a stranger's chest. Sorry, stranger. At least you smelled nice. Anyway this commute is *okay*. Two stars.

Evening: This commute is also fairly uneventful, which is surprising since rainstorms and other inclement weather have a habit of sending the trains into some sort of hibernation. Still, I take the B and get home fast, if slightly soggily. It does take a friend of mine an hour and a half to get from Prospect Heights to the Upper West Side later that night, but that's her own fault for hanging out with me instead of going straight home, where it's safe. Three stars.

Morning: HOO BOY WHAT A DAY. I know this commute is going to be fun when I hear the poor WNYC announcer declare, with exhaustion, that service is shoddy on the BDFM trains, and it turns out this is the least of the subway's problems. Before 9 a.m., Gothamist's tips inbox is flooded with commuters complaining of NIGHTMARE scenarios on all sorts of lines. I am prepared:

Oh boy can't wait for this one pic.twitter.com/CqL4ZyNRJD

I am lucky this morning. On Tuesdays I take the C to the NYPD's 1st Precinct, so I get to bypass whatever horror show befalls everyone at my usual B,Q station. The C comes fast, but is packed, so much so that I can't move my arm to get a photo FOR JOURNALISM. A man gets gruff with me because I am in his way, but ask me if I care: this is a crowded rush hour train in the spiritual realm of evil and suffering that is Cuomo's 2017 Subway Summer, and you know what, you're in MY way, mister, as is that sub-literate baby in a stroller someone brought onboard. On the rest of the way up, I wonder if I should burn down my apartment, take the insurance money and move to Tahiti, where surely there is no subway. One star.

At 11 a.m., I commute to Midtown on the E. The ride is fine, but very cold. Air-conditioning should be banned. Two stars.

Evening: I have an event to attend near the office Tuesday night, so I don't get onboard the Q train (at Times Square) until close to 11 p.m. All goes well until we start heading over the Manhattan Bridge, whereupon the train takes a nap and the conductor announces the arrival of dreaded switch problems at Atlantic Avenue. I thought 11 p.m. would be safe from subway issues, for some reason, like how when I was a little kid I assumed one never threw up in the daytime, only at night and on the bathroom floor. Guess not.

After inching over the bridge, we finally make it into the tunnel on the way to DeKalb Av—and then the train stops and all the lights go out. "This is how I die," I think, wondering if coroners will judge me when they find out I was listening to a Reba McEntire album. Of course, interruption is brief and I eventually make it home, but the F Train Disaster Fear is still instilled within. Two stars.

Morning: While the MTA issues an "apology" for Tuesday's Misery Commute—one that a number of responders pointed out could serve as a pinned tweet—a WNYC announcer issued another inspired subway update:

"The A,B,C & D trains are running with delays" ::pitches self out window::

I take my chances with the B, which stops in a tunnel in Brooklyn around 9:30 a.m. and just sits. I Slack my boss to alert him I will be late, and pass the stalled time comprising my epitaph: She died as she lived—rage-tweeting about the subway until her heart exploded. On the rest of the a c-r-e-e-e-e-e-p-y c-r-a-a-a-a-a-a-a-a-w-l-y ride uptown, I finish my book, the fifth I've read in a month thanks to all the long rides. 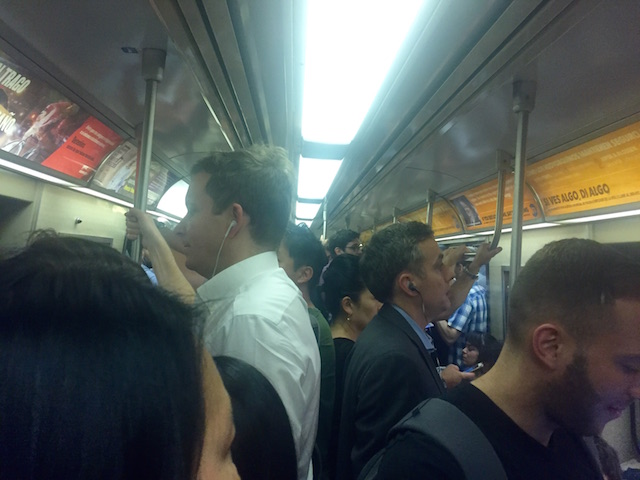 I wonder if the MTA will reimburse me for new books. I consider getting a library card, then further consider how easy it is for bedbugs to make homes in library books. I scratch my arm and think about bedbugs. I look at the red mark on my arm that I've created with my scratch and wonder how many germs live on my skin. I begin trying to spell staphylococcus epidermidis.

I do all of this at the 47-50 Rockefeller Center stop, by the way, because the train has taken another interminable stop here, and finally I decide it's worth the gamble to hop off a stop early and walk. The second I'm on the stairs to the mezzanine, the doors close and the train glides away. Son of a bitch. One star.

Evening: The F and the Q are crowded, but I do make it home on time. Three stars.

Morning: Are there delays? WNYC says yes. MTA.info says no. THE GAME IS ON. I just miss a Q train so I post up with Book #6 at the station, and it fills up FAST. The ride is, for the most part, uneventful, though we do sit under the tunnel before the Manhattan Bridge for a good five minutes with no word from the conductor. It's probably nothing, but you never know when a brief subway interruption could devolve into full-on Donner Party fiasco in this cruel world. Ultimately, though, I make it uptown, and through several chapters of Tony Tulathimutte's Private Citizens, which is quite good. Three stars. 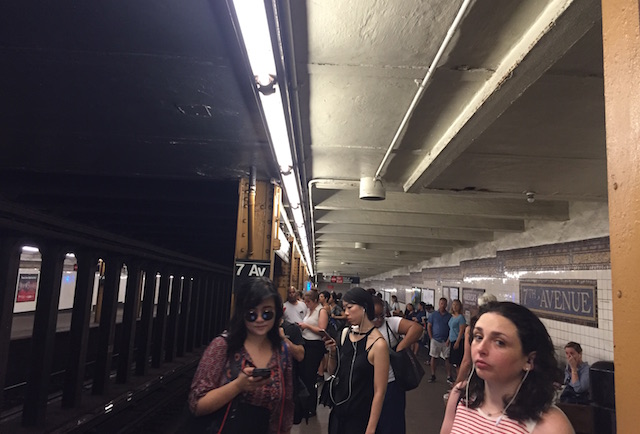 Evening: I was drunk on this train but it was fine.

Morning: I sneezed a lot on this ride but it was also fine. For me, though maybe less so for the people around me.

Evening: It also rained during this commute, but the trains did not all implode in the storm. Two stars.

SATURDAY BONUS: Two points. 1) DID YOU KNOW the 2 and 3 trains aren't running between Brooklyn and Manhattan for the next year? I did not! I found out this information from Google Maps! I'm sorry to let you down, Transit Readers, but with all the L shutdown hullabaloo this tidbit was missed, and I am enraged.

I had to pay $3 for this pic.twitter.com/VH24UuGBxP

TUESDAY:
The diary was supposed to cover only last week, per the assignment, but Tuesday morning's derailment deserves its own blurb. I was all smug Tuesday morning when I took the C to the precinct while my coworkers had to deal with some madness on the B, but that swagger soured quickly once an A train derailment on 125th Street knocked out service all over the place (and resulted in a number of injuries).

I was headed home and not to the office, which should have meant for a quick shot back to Clinton-Washington on the C. But there was no A/C service, so I took the E to the World Trade Center, wandered the length of that station's labyrinth to find the 2,3, then, thanks to unrelated delays on the 2 and 5, waited some extra time for one of those to show up and shuttle me home. I am thankful every day that I abandoned L train territory and moved somewhere serviced by a slew of lines. But still, somehow, most of those are out of service at a given time.

My commutes last week were annoying, but others' have been downright dangerous. Companies are declaring "SUBWAY EMERGENCIES," and people are afraid, with precedent, that a 20 commute ride could turn into a 3-hour ordeal. I've lived in this city for 27 years. This type of all-encompassing subway meltdown used to happen a few times a year, but now we're lucky if it only happens once a week. But, surely, help is on the way.

#commute
#commuter diary
#Cuomo
#MTA
#subway
#we the commuters
#why god
#original
Do you know the scoop? Comment below or Send us a Tip