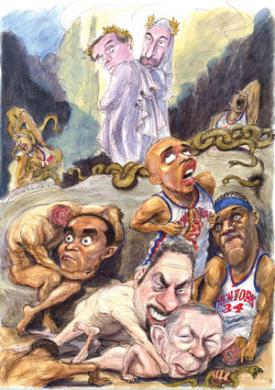 While the NBA season is less than a month old, you wouldn't know it from the amount of press the Knicks have received so far. Between the well-publicized scandals and a tumultuous 8-game losing streak, there hasn't been much good to report on. But The Observer offers a glimpse into why the media often seems to take so much pleasure in reporting on the team's embarrassing demise.

Turns out, The Garden doesn't think too fondly of the press, and goes to great lengths to inconvenience both the beat and national reporters from getting a story. The article details everything from limited player access to the constant presence of PR people monitoring writers' every move (one even sat in on Observer reporter John Koblin's interview with...another PR person). The Star-Ledger went so far as to stop sending a reporter to cover the Knicks, relying on wire reports instead, and reporter morale is incredibly low:

"It’s maddening. What it should be and what it is—it’s a shame." - Alan Hahn, Newsday
"I’ll admit that the beat makes me miserable. We all know what it’s like to cover a normal team. Covering the Knicks is so much worse." - Howard Beck, New York Times
"Every writer who covers the Knicks gets the impression that we are treated as the enemy." - David Waldstein, The Star-Ledger
“The sexual harassment trial was bad enough, and then to have a November like this, when you’re a national joke, for someone covering the team it’s depressing ’cause you want to write positive stuff. Soon the readers aren’t going to care anymore." - Marc Berman, Post
"There are very few nights where you can feel a buzz in the arena. The thrill is gone." - Frank Isola, Daily News

Twelve-year Daily News beat veteran Isola (who has a blog) reminisced of the good times, when the press was friendly with Knicks PR . These days, he's been effectively blackballed from all team matters and the Knicks have even repurposed security guards to follow him while on Garden grounds. He now openly admits he covers the team out of spite, joking, "Should I look under my car before I turn the ignition?”

Well, we hope he was joking.

Illustration from the Observer

#basketball
#beck
#daily news
#david
#knicks
#madison square garden
#media
#nba
#new york
#new york times
#news
#people
#Should I
#sports
#the garden
#the observer
#The Star
Do you know the scoop? Comment below or Send us a Tip