For Its Final Year, Shea Stadium Gets Logo from Mets 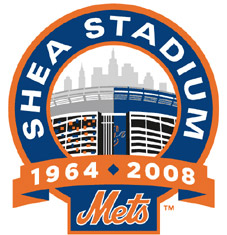 In the final year of baseball in Yankee Stadium, the legendary park will host the 2008 All-Star Game. In its 45th and final year, what does Shea Stadium get? A commemorative logo from the New York Mets. Fitting for the multi-purpose stadium that is a relic of the 1960s.

Today, the Mets, the stadium's primary occupant since it opened in 1964, unveiled a logo that players will wear on their sleeves during the 2008 season. In addition to being on uniforms, the logo will appear on things like schedules, tickets and the Media Guide. The team will announce "Salute to Shea" events/promotions for the 2008 season in the coming weeks.

The stadium, named after William A. Shea, who brought National League baseball back to New York, opened on April 17, 1964 at a cost of $25.5 million. It was home to the both the Jets and Mets, but has hosted numerous events in addition to football and baseball: Pope John Paul II, The Beatles, the Rolling Stones, Simon & Garfunkel, and Bruce Springsteen are just some of the names.

Citi Field, which has 80% of its structural steel in place, is scheduled to replace Shea Stadium by opening day 2009 at a cost of over $600 million.