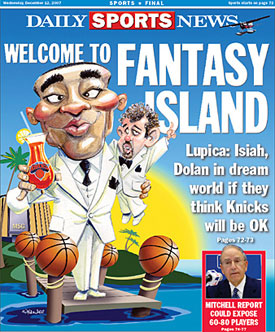 The New York Knicks are the most entertaining team in the NBA. Not because of the team's play on the court, but because of the soap-opera-like drama that takes place off the court. During Knicks practice yesterday, Isiah Thomas said that he's not walking away from the team he created. "If there's one thing that I hope all of you know about me, or will learn about me, I fight 'til I die. It's not about giving up or quitting. To me, it's win or die. And I literally mean death. I don't mean walk away, I mean death. And that's how I approach it." Does this mean that long-time Knicks fans are pulling for Isiah Thomas to actually die?

Also during the interview, Thomas was asked repeatedly about Monday's incident where he blamed the fans for his team's poor play. It seems like he wasn't too responsive to those questions, but eventually offered up a "I'm not going to get into that" response. Howard Beck of The Times actually thinks that Thomas was having a good week: Dolan wants to keep him on board, Anucha Browne Sanders and the Knicks settled her sexual harassment lawsuit, and no punishment from the NBA for the team's role in the lawsuit. Isiah Thomas - You're having the best week ever!

Despite the team settling lawsuit for $11.5 million on Monday, James Dolan reportedly wanted to throw one final jab at Browne Sanders. A source tells the Daily News that Dolan wanted to call her a liar, but the NBA forced Dolan to back off on the language. Even so, Dolan got this into his press release, "the outcome was a travesty of justice." You know what's a travesty, James? Your New York Knickerbockers.