For Barron, It's Totally About Race 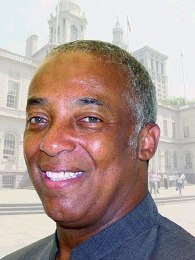 As we mentioned, City Councilman Charles Barron held his press conference yesterday to announce his candidacy for the 2009 Brooklyn Borough Presidency. He told the crowds that his platform included affordable housing, health care accessibility, more jobs, standing up to developers who use eminent domain, ending mayor control of schools and more would help everyone. "Am I going to be a borough president for all the people? Absolutely. But I'm letting y'all know now, I'm taking care of black folk. Unapologetically."

The NY Sun noted Barron also "argued that his platform would benefit white residents as well, because 'when I take care of black folk, that's going to impact you,' he said." When the Politicker interviewed Barron after the conference, the City Councilman said, "Most media outlets are run by white, male editors, correct? There's no way in the world that, 99 percent of media outlets controlled by white males, that there's not going to be no hint of racism in it? I mean that's unrealistic... The Post, I think, is a racist newspaper, because anybody who is pro-black they consider controversial. The Post is racist. FOX 5 is racist. You know, I think there's racism in everything."

The Post's coverage of Barron's candidacy included a quote from Reverend Al Sharpton, who said to the crowd, "There is no one more qualified, no one has paid more dues, no one who has showed more vision and courage." You can read Barron's City Council bio here; he represents the 42nd District, which is made up of parts of East New York, Brownsville, East Flatbush, Canarsie, and is the chair of the Higher Education Committee (he's also a member of the committees on Land Use, Consumer Affairs, Women's Issues, Landmarks, Public Siting and Maritime Uses).