Governor Andrew Cuomo has called the MTA everything from “diabolical” to a “disgrace,” but this is the year he’s taking action. Today he unveiled a 10-point plan to “transform” the MTA, raising funding through congestion pricing on motorists in parts of Manhattan, new taxes, and consolidating various transit agencies under one roof.

The announcement today was foreshadowed by Cuomo's abrupt action in halting the MTA's L train shutdown plan, and the success or failure of Cuomo's new plan for the L rehabilitation will show whether the Governor's power consolidation will be good for riders. Or whether Cuomo, who already controls the MTA board, should leave micromanaging the transit agency to transit professionals.

Back in a February speech to business leaders, he described how he got involved in the L train project. Smacking the microphone for effect, he said, (in a sarcastic voice) “Excuse me, is there a different way to do this? Wake up!”

MTA staff that had spent more than three years working on the L train closure told Gothamist that they had put their “heart and souls” into the project, only to find out on live television that the governor would be changing the plans. Morale sunk, one person in the room told Gothamist.

"Everybody in these organizations is very professional," Janno Lieber, the MTA’s chief development officer in charge of the new plans, told Gothamist, when asked about morale at the agency after the governor’s abrupt change of plans.

“It’s a new challenge and people are stepping up,” he said. “I think some positive stuff is being created in terms of teamwork. Doing something positive in a compressed time frame always builds morale, so good stuff."

There was a morale boosting event for L train planners at a bar in the East Village recently, a venue close enough to actually hear the L train construction already underway on 1st Avenue.

Certificates were printed up that read: "For all your hard work preparing for the L Train Rehabilitation." 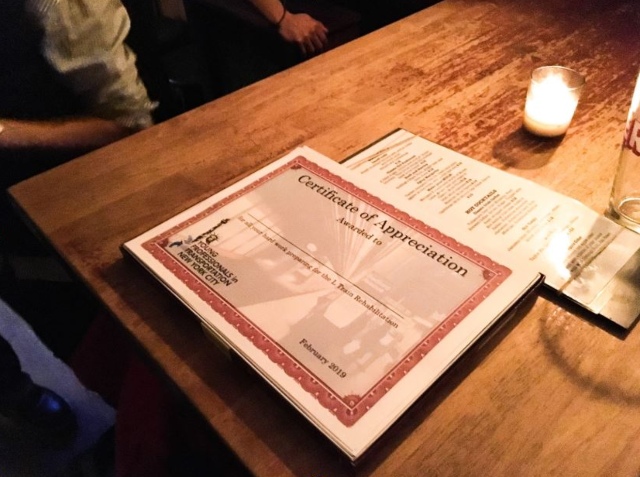 "People working at these agencies aren't just robots who push paper around, these are people who are passionate about their work, and the work that they do and the people they work with," Jeffrey Brauner, who works for the Port Authority and is deputy chair of Young Professionals in Transportation, the group hosting the event.

Despite the libations—and event in their honor—the MTA staff there declined to comment on the record about how the L train planning has affected them professionally or personally.

But the contracting community isn’t afraid to weigh in.

“If you’re a contractor choosing to bid MTA work you will be a little bit more sceptical; are they going to change mid-course like they did with the L train?” Brian Sampson, the president of the regional chapter of the Associated Builders and Contractors, told Gothamist. “Is the MTA a less attractive client? Yeah, it's potentially going to be the case."

Sampson said one reason MTA projects are so expensive is they pay a prevailing wage, which is 25-30 percent more than what the market might pay for a non-public works job. There are also rules about hiring union workers—which decreases the eligible pool of contractors, who can ultimately can charge more for projects because there’s less competition.

But this is a new era, and the MTA is trying to contain its costs, get projects done on time and on budget. And it’s having some success. The Long Island Railroad’s Double Track project was completed a year early.

But expensive projects that have dragged on for decades, like the $10 billion East Side Access, remain a weight on the MTA’s necks.

Janno Lieber expects the new L train tunnel repair plan will cost less than the original $477 million plan, because less than 20 percent of the benchwall will have to be removed, but the contract negotiations are ongoing. And the time frame, 15 to 20 months, remains fluid.

"Yeah, they may save money on this particular piece of the MTA infrastructure, but at what cost down the road," Sampson said..

"To be clear this is not exotic in its scope and complexity," Lieber told Gothamist about the new plan.

For more on this story, listen to reporter Stephen Nessen's feature on WNYC:

While the original L train plans have been scrubbed from the MTA’s website, it posted this stub of a page Monday with some of the work that will be done under the new plan.

Lieber told Gothamist that all of the old work will still be done. In addition to replacing the tracks and cables damaged by Sandy, the agency will build new power stations, pump rooms, expand platforms, add mezzanines and elevators at some stations.

And MTA staff aren’t waiting for the next blow from the governor to tinker with the agency's structure. For example, Managing Director Ronnie Hakim said at a recent board meeting on big projects there will be one person responsible to make sure there are no, um... last minute changes coming from the various departments.

"We can't have changes like that anymore, we have to stick with what we planned," she said.

And still the governor remains an ever present wild card. There's already signs he's sticking his nose into another big MTA project, Andy Byford's Fast Forward plan to replace all the signals.

It's expected to cost at least $40 billion dollars, and require more track shutdowns.

Byford wants to convert all of the old signals to CBTC. His plan notes: ”Communications-based train control (CBTC) is a state-of-the-art signal system that includes new signals and modernized interlockings.”

But the governor disagrees. At the speech in which he called the agency a “disgrace” he also said CBTC is “1980s technology” and flashed a screenshot of John Travolta from Saturday Night Fever dancing on the tracks. (Fact check, that film came out in 1977, Governor)

Cuomo suggested ultra-wide band is the “state of the art, today and that’s what we should be looking at, at the MTA. But the bureaucracy has no incentive to innovate.”

In Byford’s Fast Forward plan, he makes a nod to ultra-wide band, but declines to fully push for it: “There are limits to how quickly we can transform the subway, though emerging technologies such as ultra-wideband could, if proven, reduce our timeline further.”

But if the L repairs are a success, the governor may be on to something.

#andrew cuomo
#Cuomo
#l train
#l train shutdown
#MTA
#unshutdown
#we the commuters
#original
Do you know the scoop? Comment below or Send us a Tip