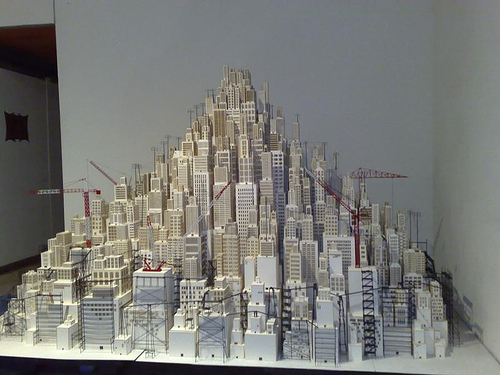 The art group collected under the name Flux Factory is being pushed out of their Queens warehouse gallery to make way for the MTA's $6.3 billion East Side Access project.

Currently there is an amazingly intricate group installation being housed in the gallery called New York New York New York which the group describes as "a New York City that is the forgotten past and the fantastic future all at once. A New York City where anything is possible". No doubt the imagined alternate reality doesn't contain eminent domain laws and high rents. amNewYork spoke to both Flux Factory co-founder Morgan Meis, and a spokesperson for the MTA:

Meis said that the MTA for years failed to communicate its intentions for the site. "They are not interested in an open flow of information. It's unbelievable. They don't see themselves in anyway responsible to the public."

"The MTA is in negotiations with the property owner to acquire the site," said the spokesman, Jeremy Soffin, in an email message. "The MTA held a public hearing on February 22, 2007, at which time it clearly detailed the properties being acquired and the intended uses for those properties. Flux Factory, as well as all other affected parties, was advised of the public hearing by mail; the announcement for the hearing was also advertised in the local press."

The group started out in Williamsburg in 1994 but was priced out 5 years ago when they made the move to this current space, where now even their 15-year lease is useless to them. And it's doubtful the MTA will install a gentrification toy crane game in their fancy underground tunnel.

#A New York
#A New York City
#art
#city
#east side
#east side access
#MTA
#new york
#new york city
#queens
#The MTA
#williamsburg
Do you know the scoop? Comment below or Send us a Tip