The Trump supporter accused of mailing improvised explosive devices to some of the president's frequent rhetorical targets appeared in Federal court in Manhattan on Tuesday, and was ordered held without bail.

Cesar Sayoc faces five Federal felonies for allegedly mailing 13 pipe bombs to Democratic politicians, figures, and funders, two former intelligence chiefs, as well as CNN’s offices in Atlanta and New York. Though none of the bombs exploded, the FBI called it a “domestic terrorist attack.”

Sayoc has not yet entered a plea. Wearing dark blue, jail-issue medical scrubs, he strode unrestrained into Judge Robert W. Lehrburger’s courtroom Tuesday, accompanied by several burly U.S. Marshals in suits, before taking a seat next to his lawyer, Federal Defender Sarah Baumgartel.

Then the judge read the charges against Sayoc out loud, including interstate transportation of explosives, illegally mailing explosives, threats against former presidents and assaulting federal officers. He faces up to 58 years in prison.

“This defendant poses a serious danger to the public and a risk of flight,” Assistant United States Attorney June Kim told the court, explaining why the government opposed Sayoc’s pretrial release. A grim-faced Sayoc didn’t contend otherwise, but reserved his right to apply for bail later.

When it was over, Sayoc hugged his lawyer, Baumgartel, before the Marshals escorted him away.

The 56-year-old was arrested in Florida on October 26th, a day after investigators at the FBI laboratory in Quantico, Virginia discovered a fingerprint on a bomb sent to Rep. Maxine Waters (D-Ca.), FBI director Christopher Wray said at a news conference announcing the arrest.

“This is utterly unacceptable. Political violence or the threat of violence is antithetical to our vigorous system of self-government,” Jeff Sessions, the United States Attorney, said at the same news conference,

“You advocate for your beliefs, enthusiastically. But we peaceably and lawfully comply with the results,” Session added. 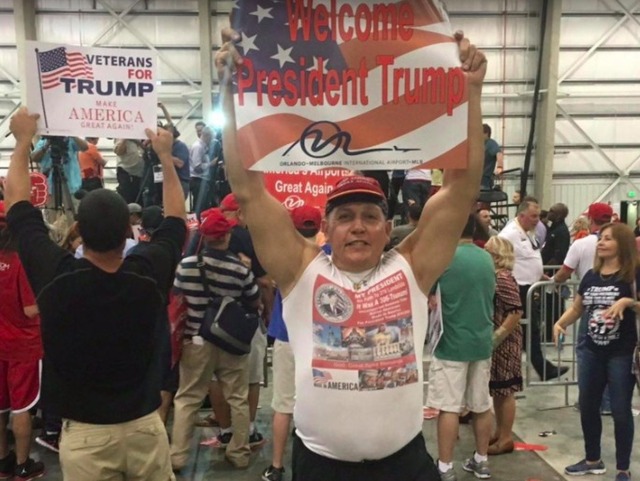 Sayoc told police he was living out of his van, prosecutors said. The van’s windows were plastered with decals—some praising President Trump, others denigrating prominent Democrats, including former President Barack Obama, as well as CNN, police said.

Many of these had a rifle-scope sight superimposed on them.

@CBSMiami I have some pictures of this van I saw him at a stoplight one day and thought is was very strange. pic.twitter.com/VWUwznJK8k

Working inside the van, shielded by the stickers, Sayoc began plotting the attack in July 2018, investigators alleged. He built bombs using a six inch length of PVC pipe, a small clock, a battery, wiring and what FBI Director Wray called “energetic material,” that is, explosives. Some of the bombs were embedded with glass shrapnel.

“These were not hoax devices,” Wray insisted.

But absent from the FBI’s list of components in Sayoc’s bombs is a detonator—a small cap-like device normally required to trigger a bomb’s main charge.

Still, the devices sowed fear on the cusp of a national election.

The first was found at George Soros’s Westchester mansion on October 22nd. That night, the Secret Service intercepted a second sent to Hillary Clinton; the next morning, they snared a third bomb addressed to former President Barack Obama, according to a Secret Service news release.

Then, as CNN anchors Jim Sciutto and Poppy Harlow were reporting live on these developments from CNN’s New York City studio at the Time Warner Center, an alarm sounded, calling for all to evacuate the building, the news network said.

A 14th bomb, addressed to Tom Steyer, the billionaire leading an expensive effort to impeach President Trump, was discovered after Sayoc was arrested. A spokesperson for the U.S. Attorney for the Southern District of New York, who is prosecuting Sayoc, told Gothamist additional charges were likely.

Each bomb was mailed in a bubble wrap-lined manila envelope with six Forever stamps. Each envelope was addressed by hand in all capital letters, bearing the same return address: the office of U.S. Representative Debbie Wasserman Schultz.

He’s due back in court November 12th.

#bomb
#cesar sayoc
#donald trump
#pipe bombs
#original
Do you know the scoop? Comment below or Send us a Tip